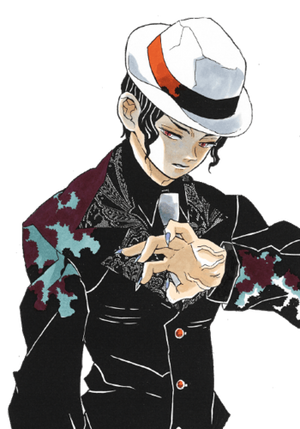 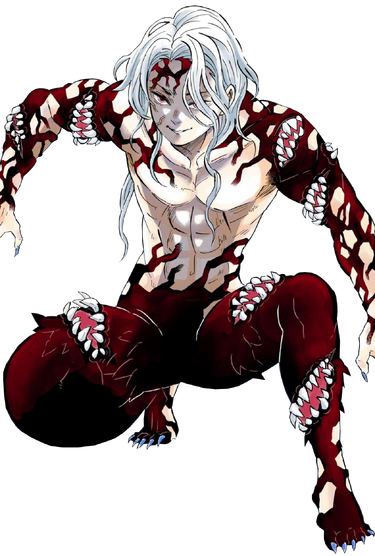 The first demon, transformed by an experimental medicine over a thousand years ago, he found himself weak to the sun, but otherwise "perfect" and "eternal." He attempted to get the cure for his weakness to the sun at any cost and created demons in the hope that one would overcome the sun and let him become truly perfect. He is the one that killed Kamado Tanjirou's family and transformed his sister into a demon for the same reason.

Gender: Varies. Referred to as male

Superhuman Physical Characteristics, Immortality (Types 1, 2 and 3), Acrobatics, Martial Arts, Regeneration (High-Mid. Even having his body and head destroyed wouldn't kill him. Instantly regenerated as Obanai was cutting through his neck and his regeneration is so fast that even Mitsuri thought that he didn't get cut for a moment), Extrasensory Perception (Can feel demons' and humans' presences, as well as bloodlust), Absorption (Was going to absorb Tanayo, and planned to absorb spikes that penetrated his flesh, as well as planning to eat Nezuko to obtain her immunity to the sun), Adaptation (Adapted to become immune to being beheaded by blades created with sunlight imbued metal. Should be capable of adapting to poisons better than other higher moon demons, who became resistant to wixeria poison, which kills regular demons in seconds, and was adjusting to a poison made to transform demons into humans), Statistics Amplification and Transformation (Can enter battle form which amplify all of his abilities), Biological Manipulation, Corruption (Type 2) and Power Bestowal (Through blood), Blood Manipulation, Battle-Biological Manipulation and Durability Negation (Causes cells to rupture with his blood), Limited Telepathy (Can read thoughts, but only if he’s shared blood with the person), Overwhelming Aura, Fear Manipulation and Paralysis Inducement (His aura terrifies other members of the Kizuki. Paralyzed and made Akaza bleed with his aura only), Shapeshifting (Can take a female form and he can freely switch his body into other forms, like young student), Elasticity (Can extend his arm), Self-Destruction (Muzan can force his body to explode into 1800 pieces to escape), Chain Manipulation (Can manipulate blood chains), Curse Manipulation (Muzan can send curses at others), Weapon Creation, Natural Weaponry and Body Control (Even low-level demons can grow weapons from their body. Muzan can control his body and turn parts of it into massive mountains of flesh), Spatial Manipulation in Dimensional Infinity Fortress (Can freely control entire structure of it and seemingly suck others and himself into it), Reactive Power Level (In intense situations, Demons can reach an explosive growth), and Regeneration Nullification (Up to High-Mid. Somehow nullified a Demons regenerative abilities, and lower demons can sprout arms from their severed heads)

Attack Potency: Multi-City Block level (Incomparably stronger than the Upper Moons. Even while weakened and aged, he easily held back Gyomei, Sanemi, Giyuu, Obanai, Mitsuri, Zenitsu, Inosuke, and Kanao at the same time and later one-shot all of them after getting serious), can ignore conventional durability with his blood (If his blood makes contact with someone he can completely destroy one's cells and fully melt them from inside)

Speed: At least Massively Hypersonic+ (Much faster than Akaza, his attacks are hard for Tanjiro, Giyuu, Mitsuri and Obanai to dodge and counter)

Lifting Strength: At least Class 100 (Should be comparable or stronger physically than Gyomei Himejima)

Durability: Unknown. Multi-City Block level with his neck (While the durability of a Demon’s body is inconsistent and can be hurt by weaker foes, their necks are their most durable body part and can tank attacks from characters who are comparable to their AP); regeneration makes him very difficult to kill

Range: Several meters (Can grow his arm into a mountain of flesh to crush others), hundreds of meters with spatial manipulation, kilometers with telepathy

Intelligence: High. Lived for over a millennia.

Weaknesses: The sun turns him into ashes. Extraordinarily arrogant and a perfectionist, and is easily offended. A hit from a Crimson Red Nichirin Blades can hamper demonic regeneration and even incinerate their cells.

Shapeshifting: Muzan can control his body's shape and even his presence, making him able to transform into someone completely different without even those with extrasensory perception noticing, though he cannot fool Kamado Tanjirou's smell. The shapeshifting allows him to become a child, an adult, a woman, or even to grow a pillar of flesh, eyes, and mouths to eat others or a cocoon of flesh to dilate and adapt to poisons.

Demon Blood: His blood causes every cell in the body of those that it enters the body to transform, transforming them into demons. This gives them several enhancements by default (heightened strength and senses, high-mid regeneration, eternal youth and shapeshifting), might possibly give extra powers (Caster demons obtain blood arts, which can vary from simple thread manipulation to spatial manipulation), but comes with several drawbacks (sun will reduce the demons to ashes, items imbued with the sun's energy will kill if used to decapitate the demon, wixeria flowers become deadly poisonous to them, and they have a craving for human flesh). Overdose will cause the cells to break down one by one.

Blood Techniques: Techniques obtained through the manipulation of his blood, they greatly vary in effect.

Black Blood Technique: Chain of Thorns: Essentially, several telekinetically controlled barbed wire that wraps around the enemy to kill them.

Dimensional Infinity Fortress: A pocket dimension to which he can teleport others and himself into a maze made up of several rooms. The pocket reality contains several demons, including upper moon members like Akaza. It's unknown if it is the Fortress or Muzan himself making it so, but specific points are upside down.

Combat Form: When fighting Muzan can adopt a more monstrous form, with a dark-red mass covering his limbs, featuring sharp-toothed wide mouths, with his torso exposed. His hair becomes longer, messier and white. His speed, strength, reflexes and power are greatly magnified in this form.

Chrollo Lucilfer (Hunter X Hunter) Chrollo's profile (Speed was equalized, both had full knowledge on each others abilities, the battle took place in a crowded park and Chrollo had prep time)