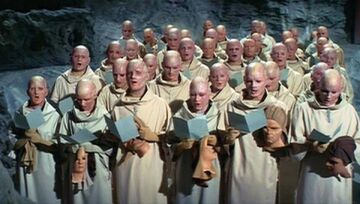 The mutants were descended from a long line of mutated humans, whose origins dated back to the 1990's when the human controlled governments of Earth waged war with one another – a war which devastated significant parts of the population, and caused drastic geological upheaval.

Survivors of the nuclear holocaust were forced to seek shelter in the ruins of cities contaminated with atomic radiation. The exposure to this radiation caused severe genetic defects – defects which were passed down through the generations, forcing select groups of mankind to evolve into a new subspecies of mutant. Two-thousand years later, many of these mutant descendants began to develop advanced telepathic abilities.

The community of telepathic mutant humans encountered by Taylor and Brent in Beneath the Planet of the Apes lived in the ruins of New York City and worshiped the ultimate nuclear weapon - the instrument of the planet's final destruction and what they declared to be a "Divine Bomb".

Tier: At least 10-B, possibly higher

Name: Mutants, Children of the Bomb

Age: Unknown, varies (Though they potentially have the same life spans as ordinary humans)

Powers and Abilities: Mind Manipulation, Telepathy, Illusion Creation (Can strip a person's thoughts and project them in the air like holograms, and force them to answer any questions they telepathically ask, and their illusions can range from believable earthquakes that affect even animals to entire fields of crucified apes set on fire), Perception Manipulation, Madness Manipulation (Type 2), Possible Resistance to Radiation

Durability: At least Human level, possibly higher (One of them was struck by a mace capable of destroying large chunks of stone and survived for a few seconds)

Weaknesses: Since they aren't fighters they prefer to make their opponents fight and kill each other or torture them with their mind powers.

Retrieved from "https://vsbattles.fandom.com/wiki/Mutants_(Beneath_the_Planet_of_the_Apes)?oldid=5512464"
Community content is available under CC-BY-SA unless otherwise noted.