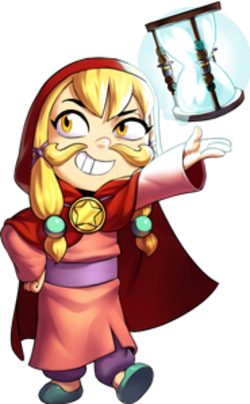 Mustache Girl is the main antagonist in A Hat in Time. She meets up with Hat Kid and plans to destroy the Mafia and get rid of all evil. Once she finds out the Time Pieces powerful, she takes them for herself and uses them to achieve her goal.

Attack Potency: Wall level (Overpowered two Mafia Goons, who can survive large falls from space) | Multi-Solar System level (Her powers appear to come from the Time Pieces themselves. Uses a single Time Piece to create a pocket dimension that composes of countless starry structures and nebulae. This dimension as well begins to collapse when her powers start disappearing, and completely vanishes upon her defeat) | Multi-Solar System level (Superior to her previous form. Utilizes Death Wish Time Pieces this time around, which not only creates another starry dimension, but can create a Time Rift with several distant stars)

Intelligence: At least Above Average, possibly higher (Learned how to use the Time Pieces with ease, changed the entire surface of the planet with the Time Pieces to make all bad guys obey her.)

Weaknesses: She can be too obsessed with justice.