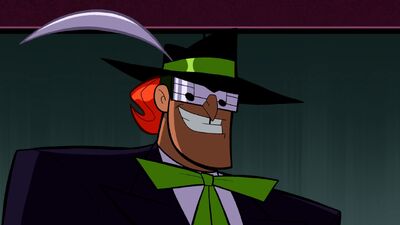 The Music Meister is a villain that appears in the animated series Batman: The Brave and the Bold.

Tier: 10-A physically, 9-B with normal equipment. Higher with prep, Unknown with powers

Origin: Batman: The Brave and the Bold

Attack Potency: Athlete level physically, Wall level with standard equipment (Could one shot Black Canary). Higher with prep (Created a large death-trap and amplified his powers to a global scale), Unknown with powers (In the comics, could presumably control Bat-Mite if he wasn't stopped by Batgirl)

Durability: Street level to Wall level (Could take hits from Batman and his equipment, took a Canary Call point blank and was only knocked back)

Range: Standard melee range, higher with powers and equipment, global with prep (Got control of a satellite that put his powers on a global scale, along with technology manipulation)

Intelligence: Extraordinary Genius (Invented all this and more)