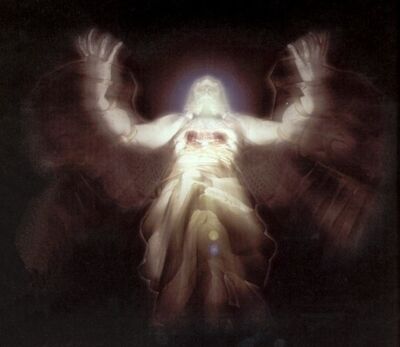 Mundus (Lat: "world") is the primary antagonist of the first Devil May Cry. According to legend, Mundus was a demon prince who consumed the fruit of the sacred tree Qliphoth in ancient times, gained divine powers and killed the god of demonkind, becoming the ruler of the Underworld. Soon after, Mundus' rule was opposed by the demon god Argosax, leading to a great war that separated the Underworld in two kingdoms. Sometime after the war, Mundus began to covet the realm of humans and planned to take over the universe. As a result, his right-hand man, Sparda, rebelled against him and defeated and sealed him away.

Superhuman Physical Characteristics, Immortality (Types 1 and 3), Self-Sustenance (Types 1 and 2), Illusion Creation (Was capable of creating illusions in Mallet Island), Mind Control and Soul Manipulation (Put Vergil's soul in Nelo Angelo armor and later controlled his mind. Casually killed Griffon with just his projection, who's capable of reforming his entire physical form so long as his core, which is stated to be his very soul, still intact), Regeneration (Low-High; far superior to Sid, who can come back from a puddle of blood), Flight, Large Size (Type 1), Danmaku, Information Analysis and Preparation (Collected data from Dante's fight style when he send demons to attack him), Energy Manipulation, Dimensional Travel, Avatar Creation, Matter Manipulation (can attack with Particle Beams), limited Power Nullification (Restrained Nightmare's free will), Chain Manipulation, Fire Manipulation, Non-Physical Interaction (Destroyed Griffon's body and "core" when killing him, likely interacted with intangible demons on Mallet Island such as the Sargasso and Sins), Lightning Manipulation, Light Manipulation, Magma Manipulation, Darkness Manipulation, Creation (Created Trish, Frosts, Nightmare and many other demons), Weather Manipulation, Teleportation, Unholy Manipulation, Likely Possession (Scales from the weaker demons, who have all shown multiple times to be able to possess inanimate and living things), Forcefield Generation, Reality Warping (Passive maintains Mallet Island. Warps Mallet Island to a new location every night and drastically warped large parts of it), Fear Manipulation and Empowerment (The mere presence of demons causes fear, can also feed off despair and get stronger from it) | Resistance to Extreme Cold, Cosmic Radiations, Time Stop, Reality Warping, Transmutation, Size Manipulation, Petrification (Demons are stated to be resistant to the Beastheads assimilation process, which includes those abilities), Soul Manipulation (Scales from other demons, who can handle going through the crust of the demon world, which is stated to turn souls into monsters), Magma Manipulation, Corruption (Type 3. Can breathe on demonic air, which turns normal people into monsters), Holy Manipulation, likely Spatial Manipulation (Managed to break Yamato in his fight against Vergil), Madness Manipulation (Type 3, endured being in the Demon World, which causes despair and insanity), Disease Manipulation (Approaching the Demon World, being inside or near a Demon World nexus causes "unearthly illness" which makes it difficult to concentrate and causes intense nausea and dizziness) and Fear Manipulation (Feeds of despair, can be around other demons, and their presence can cause fear)

All previous abilities up to possibly even higher levels, Portal Creation and BFR (Created the portals which sent Dante and Beryl to an alternate universe and the Void), Inorganic Physiology (Type 2), Sleep Manipulation, Weapon Creation, Nonexistent Physiology (Type 1; Stated to be embodiment of the Void which is stated to empty), passive Corruption (Type 3), Mind Manipulation, Madness Manipulation (Type 3), Disease Manipulation, Soul Manipulation, Space-Time Manipulation, Time Stop (In the alternate timeline, Mundus was the embodiment of a void that was the source of all the energy contained within the Demon World, which is stated to be able to warp the minds of men, drive any human in it insane, turn souls into monsters, create time paradoxes, stop time on certain areas and warp space) and Fear Manipulation (Made Beryl collapse out of terror by merely existing near her)

Range: Tens of meters normally. Varies from tens of meters to cross-universal with various powers and abilities | Low Multiversal

Intelligence: Gifted (Ruled the Demon World for a while and led the demonic invasion of the Human World. Can create sentient life from scratch. Fought in a great war)

Weaknesses: He is rather overconfident.

True Form
Add a photo to this gallery

Doctor Strange (Marvel Comics) Strange's profile (Base Mundus was used, and Strange didn't have summons or artifacts higher than 3-A, Speed was equalized)

Start a Discussion Discussions about Mundus (Devil May Cry)