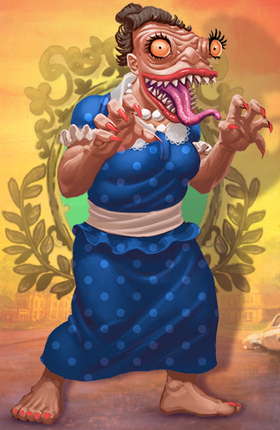 Mrs. Maaargh is a character from the long running series called Goosebumps, she is the headmistress of the Caring Academy and she has a "food chain" where the lowest on the scale will be eaten by her. She was the antagonist of Creature Teacher and Creature Teacher: The Final Exam.

Powers and Abilities: Superhuman Physical Characteristics, Natural Weaponry (Sharp claws and teeth) and Can disguise herself as a human

Attack Potency: Street level (Can casually eat kids and she has been doing this for years. Stated that she is superior to humans)

Intelligence: Above Average (She must know a lot about things like math, science and other school topics given her position. She has kept her true identity a secret from her peers and her victims parents for an unknown amount of time)

Weaknesses: Making her laugh by tickling her feet can put her into hibernation, is allergic to wildflowers, has sensitive taste buds