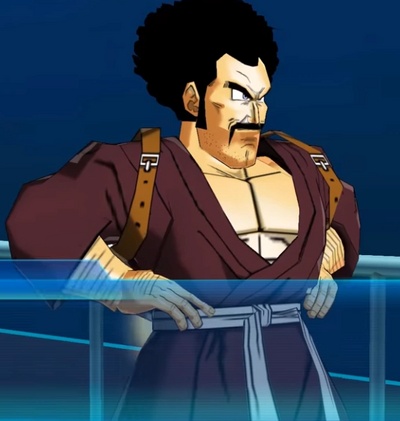 Mr. Satan (Dragon Ball Heroes) is a denizen of Universe 6 created likely as a time anomaly which was engineered by Sealas during Super Dragon Ball Heroes: World Mission. In this variation, he is an exceedingly well-known hero throughout Universe 6 and is even the God of Destruction Candidate. He was chosen to participate in a variation of the Universe 6 Tournament to test the might of Universe 7.

Age: Unknown (likely the same age as the canon Satan)

Powers and Abilities: Superhuman Physical Characteristics, Acrobatics, Expert in Martial Arts, Weapon Mastery, Flight (With his jet-pack), Can possibly create dimensional rifts and destroy space-time and pocket dimensions with his energy via powerscaling, and likely Far More (Should have far more abilities due to being a God of Destruction Candidate, but it is Unknown what exactly he has)

Attack Potency: Multiverse level+ (Xeno Vegeta, who is comparable to Xeno Goku, described his power to be capable of besting his own much to his chagrin, and the entire group, which consisted of those comparable in power to Xeno Goku and Vegeta, described the battle as an insane struggle to win. Is the God Destruction Candidate of Universe 6)

Intelligence: Above Average (Seems to be an extremely capable combatant even amongst those such as Xeno Goku and Vegeta. became the God of Destruction Candidate)