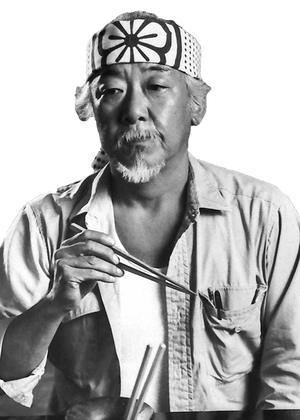 Keisuke Miyagi, better known as Mr. Miyagi, is a Okinawan martial arts master who fled to America to avoid a fight to the death challenged to him by his former best friend. When in the states he was placed in the Manzanar Japanese internment camp. He later joined the U.S. army in WWII, even receiving a Medal of Honor for his service. However while he was away at war his wife and son died in the camp due to complications with childbirth. This tragedy led him to isolate himself from society and turn to alcohol to drown his sorrows. His life changes when he defends a high school student named Daniel from being beaten to near death by a gang of bullies. After that night he reluctantly accepts the kid as a karate student, with their relationship helping him cope with the loss he's suffered with for decades.

Speed: Peak Human (Able to land hits on extremely trained fighters with little to no difficulty) with Superhuman reactions (Caught a flying arrow from a highly skilled archer. Can easily dodge attacks from Karate masters and weapons experts without even taking a stance)

Lifting Strength: Athletic Human (Effortlessly broke a grown man's grip and pushed him several meters back, threw Mike Barnes back into the dojo)

Striking Strength: Wall Class (Far stronger than Daniel who could defeat Chozen and break a foot of ice with his bare hands. Was stated to be capable of killing a Peak Human fighter in a single hit)

Durability: Wall level (Tanked a full power hit directly to the spine by Chozen while he was using a weapon)

Intelligence: Extremely knowledgeable in martial arts, medicine, gardening and philosophy, was a highly exceptional soldier in the 442nd Infantry Regiment who even taught his commanding officer karate

Weaknesses: Mr. Miyagi is an extremely merciful pacifist, always sparing his opponents and willing to even escape his home country to avoid conflict. Also plays around with fighters from time to time.

A true martial arts master, Miyagi possesses extraordinary skill. Primarily a counter-fighter, his ability to read an opponent's intentions is exceptional. He often waits for his opponent to attack, then dodges with one quick, economical motion that positions him perfectly for a counter. Miyagi never wastes movement; whether on offense or defense his techniques achieve maximum results with minimum effort. Aside from the standard strikes his Miyagi-Do Karate also incorporates an arsenal of throws and joint manipulation techniques. Miyagi's karate training has also allowed him to achieve practically superhuman feats of strength, such as splitting a giant wooden beam in half and catching an incoming arrow with his bare hand.

Due to his age and small size Miyagi's opponents constantly underestimate him, and he uses this to his advantage. Miyagi often uses his opponents' body weight and offense against them, and the core of his karate is defensive-minded. It takes a lot of balance and technique to do this properly, but in Miyagi's hands this style is much more effective than any aggressive one. Daniel also seems to be at his best when he follows his mentor's example; he defeats the aggressive and physically dominant Mike Barnes with a powerful counterattack after switching to a superior guard position taken from Miyagi's kata.

In the second film, Mr. Miyagi explains that he is descended from Shimpo Miyagi, who was very fond of both fishing and sake. One day in 1625 while fishing and very drunk, he passed out on his fishing boat off the coast of Okinawa and ended up on the coast of China. Ten years later, Shimpo returned to Okinawa with a wife, two children, and the secret of Miyagi family karate.