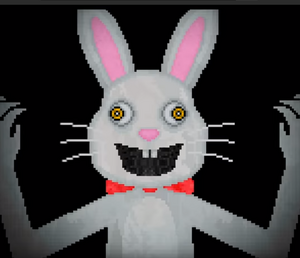 Mr. Hopp is a doll who was created by Ruby’s grandmother Esther after she supposedly “looked into the fires of hell”. After Esther died unexpectedly, Mr. Hopp would on many occasions come to life, wandering through the house at night. On possibly April 18th of the next year, Mr. Hopp killed Ruby’s parents, before chasing Ruby around the house.

Depending on the player’s choice, Ruby can either stay in the house and go back to bed, where Mr. Hopp will loom over her as she sleeps, or escape the house, either by shooting Mr. Hopp (though not actually killing him) or by burning down the house with him trapped inside.

Gender: Unknown, the doll is referred to as Male

Powers and Abilities: Superhuman Physical Characteristics, Madness Manipulation (Likely Type 2), Possession (Possessed the rabbit doll created by Esther), Transformation and Size Manipulation (Can turn from a small plushie to a human-sized rabbit, Can turn into a giant Rabbit Spider, Can turn into a giant (Large Size (Type 1))), Inorganic Physiology and Small Size (Type 1) as a plushie, Enhanced Senses (Can see Ruby even when missing eyes, After Ruby steps on a toy, which makes noise, he can temporarily track her exact position, even if she moves along the other side of a wall, Can sense Ruby behind him if she gets too close), Sound Manipulation (Plays music as he walks around, Replicated the voice of Ruby's mother, father, and Esther), Teleportation, Light Manipulation (Can create a flickering light), Reality Warping (Created the giant Eyeball room, Replaced the eyeball room with a message on the wall, Can extend the size of the house greatly, May be responsible for the sewers appearing in Ruby's basement), Technology Manipulation (Cut off a phone call from Mark, Can activate toys that make sounds, Can cause a radio clock to spark and play music), possibly Corrosion Inducement (At some point, his bowtie starts melting), Darkness Manipulation (Can create dark hands, Can fade into shadows), Possibly Death Manipulation (Was likely the cause of Esther’s untimely death, as it was stated to be unexpected and bizarre), Either Resurrection or Illusion Creation (It's unclear if Esther was resurrected by Mr. Hopp or just created as an illusion), possibly Summoning (May be responsible for the appearances of Slenderman and Golden Freddy, as well as the references to Pennywise), Creation (Created a toy Doomguy that disappears into shadows upon collection)

Attack Potency: Below Average level | Wall level (The corpses of Ruby’s parents are no where to be found, likely destroyed or devoured, Can punch large holes through walls, Can get under the floorboards (no basement) and punch up through the floorboards, Can turn into a giant spider), Small Building level via largest shown size (Effortlessly crushed Esther) and reality warping

Durability: At least Below Average level, possibly Higher (Was shot countless times by the same slingshot that could possibly harm its humanoid form | Wall level (Should compare to AP, In the original version of the game, could shrug off pistol shots), Small Building level via largest shown size

Intelligence: At least Average (Though he seems unintelligent in gameplay, he was just toying with Ruby)