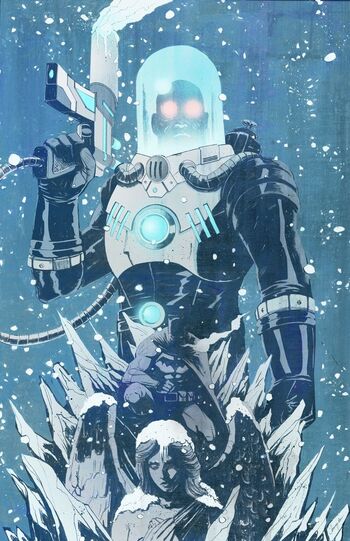 Victor Fries was a cryogenics worker operating in Gotham City trying to find a way to cure his ill wife Nora. When he preserved her in cryostasis without authorization from GothCorp, the company tried to shut his research down, and in Victor's attempt to stop them he was caught in a dangerous chemical accident that left him unable to survive outside of very cold temperatures. Building a special suit to keep himself alive, he used it to become the supervillain Mr. Freeze.

Tier: 9-A, 8-A with Freeze Gun, higher with preparation time

Attack Potency: Small Building level+ by himself (Regularly able to trade blows with Batman, and can casually break through metal doors), Multi-City Block level with freeze gun (Created a massive castle of ice, momentarily froze a held-back Superman and even an older model of the gun could freeze whole city blocks), higher with preparation time (Invented a machine that could freeze an entire Kryptonian city in minutes), freeze-shattering ignores durability

Speed: Massively Hypersonic combat speed (Can keep pace with Batman, was able to tag Cassandra Cain), FTL+ with preparation time (Created a jetpack that flew to the sun in seconds)

Durability: Small Building level+ (Unaffected by a store-sized explosion, frequently takes hits from Batman), Multi-City Block level with ice constructs (Completely immune to bullets, which requires around this much energy, some of his protective ice fields reach this size)

Intelligence: High, expert in cryogenics and surgical science. One machine he created was stated to be advanced on par with technology created by Lex Luthor and possibly the New Gods

Weaknesses: Cannot survive more than an hour without his suit.