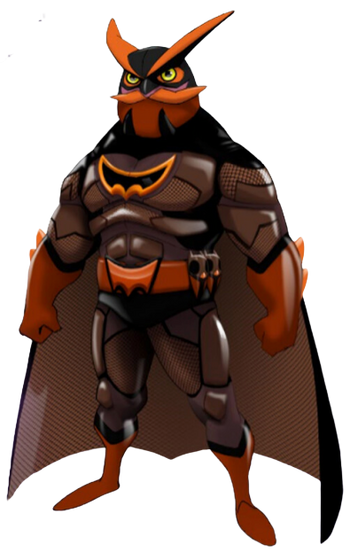 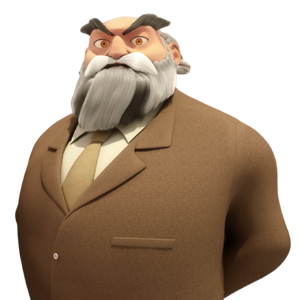 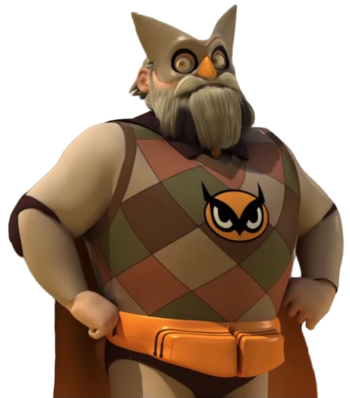 Mr. Damocles is the principal of Collège Françoise Dupont.

In the episode "Dark Owl", after trying and failing to become a superhero and being humiliated by the media for it, Mr. Damocles is akumatized by Hawk Moth into Dark Owl, an Owl-themed supervillain.

Superhuman Physical Characteristics, Expert hand to hand combatant, Acrobatics, Telepathy (Can talk to his akumatized computer, Albert, even when he's located kilometers aways from him), Expert Boomerang and Grappling hook user, Flight, Homing Attack (His boomerangs can seek targets), Technology Manipulation (Can create holograms, as well as trasmitting his message to everyone in Paris in order to lure Ladybug and Cat Noir), Creation (With the help of his computer, Albert, he can set up multiple traps, including a box with cream coming and dissapering out of nowhere), Light Manipulation (with his owl signal);Duplication, Paralysis Inducement, Power Bestowal, Possession, Corruption and Mind Manipulation (If his Akuma isn’t purified after being defeated, it would start to multiply into many more Akumas and infect different persons, turning them into Dark Owls that would remain immobile until Mr. Damocles gets Re-Akumatized)

Speed: Unknown | At least Supersonic+ with Massively Hypersonic+ combat and reaction speed (Comparable to, if not faster than The Mime, was able to keep up with Season 2 Ladybug and Cat Noir))

Striking Strength: Wall Class | At least Multi-City Block Class (Should be comparable to other Akumatized Villains)

Standard Equipment: Akumatized Computer (He doesn't carry it on him though). Owl Boomerangs

Intelligence: Gifted (As Dark Owl, he managed to outsmart Ladybug and Cat Noir and trapped them, and he would have won if it weren't for Ladybug having fake miraculouses to deliver to Hawk Moth while he's de-activating the trap)

Weaknesses: His powers will be lost if his computer has been destroyed, though the Akuma inside of it is able to multiply and can return his powers once feeling negative emotions again unless purified.

Dark Owl usually fights physically, or use some of his weaponary to attack, mainly his owl boomerangs. However, using his computer, Albert, he can take over the computers of everyone in Paris to send messages, use his owl signal, create holograms and create traps as well. He can also fly when spreading his cape and chase enemies if they try to destroy the akumatized object.

Retrieved from "https://vsbattles.fandom.com/wiki/Mr._Damocles?oldid=6139632"
Community content is available under CC-BY-SA unless otherwise noted.