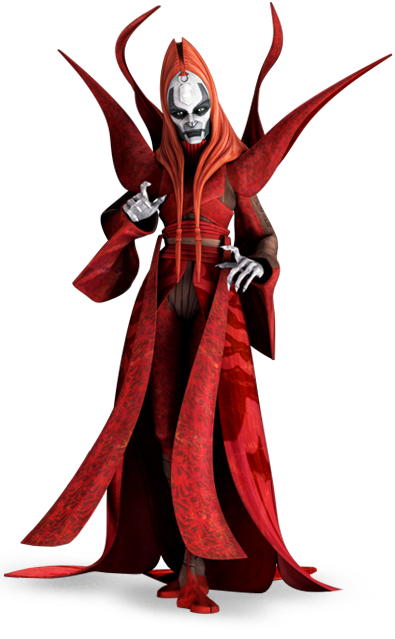 Mother Talzin is the Clan Mother of the Nightsisters in the waning days of the Galactic Republic. A conniving witch who would do anything to secure the safety of her Dathomirian brethren, her mastery of magic makes her a formidable foe to any Jedi and even the Dark Lord of the Sith himself. Although her society is predominantly matriarchal, she holds a particular fondness for her son, Darth Maul, assisting him numerous times after his defeat at the hands of Obi-Wan Kenobi.

Attack Potency: Likely Island level (Fought against Mace Windu but lost[5]. Briefly contended against a Darth Sidious assisted by a weakened Count Dooku when she was empowered by Darth Maul, but she was quickly overwhelmed and left defenceless[6]) | Solar System level (Comparable to Mace Windu and Darth Sidious)

Range: Extended melee range with sword, Dozens of metres with Force lightning and telekinesis, Galactic with magic and telepathy (Magically tortured Count Dooku despite him being on another planet thousands of light-years away, although this ritual needed preparation. Can communicate telepathically with others across galactic distances)

Intelligence: High. Is a master of the Dark Magics, skilled enough combatant to contend with the likes of Mace Windu, one of the greatest warriors in the galaxy. She's dangerous enough to be considered a "formidable adversary" by Sidious[8]. Is also a capable schemer and manipulator.

Retrieved from "https://vsbattles.fandom.com/wiki/Mother_Talzin?oldid=6656646"
Community content is available under CC-BY-SA unless otherwise noted.