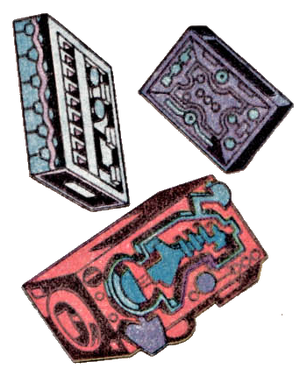 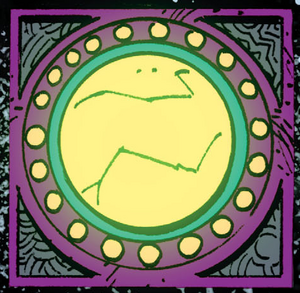 Mother Boxes are living, hyper-advanced computers used by the New Gods of New Genesis, invented by Himon. They are connected directly to the Source, and form close bonds with their owners, providing them with never-ending aid and access to powerful abilities. Mother Boxes are sentient and can act to protect their wielders without direct command. While they are only bonded to a single individual, Mother Boxes can be lent to others at the owner's directive, provided the Mother Box approves.

Mother Boxes never need to be recharged and never run out of energy, being connected to the infinite Source. They can, however, be injured or killed, but can be healed if their owner projects their love and belief into them.

The gods of Apokolips have been known to use identical devices, albeit with darker personalities, called Father Boxes.

Information Analysis (Can look up and analyze information, using it to tell their owner what to do in combat), Matter Manipulation (Can alter appearances by weaving atoms and reconstruct matter on an atomic level), Portal Creation and Dimensional Travel (Can summon boom tubes), BFR via boom tubes (Metron stated that Lightray could have banished the Black Racer), Healing and Regeneration (High - Constantly reassembled Orion's molecular structure to prevent him from being completely destroyed; They can heal others' injuries as well as their owner's), Precognition (Can detect attacks immediately before they happen), Extrasensory Perception (Can track targets anywhere and sense potential trouble elsewhere in the universe), Energy Projection (Can fire energy blasts), Energy Absorption (Can absorb energy attacks), Forcefield Creation (Can generate forcefields around their owner's body as well as make unidirectional shields), Attack Reflection (Can reverse the polarity of energy attacks, absorbing and sending them back), Intangibility (Enable their owner to phase by thinning out their atomic structure), Statistics Amplification (Mother Boxes grow more powerful around radiation), Telepathy (Can examine minds), Biological Manipulation (Placed a genetic imprint onto a basic life form, altering it according to Lightray's desire), Mind Manipulation (Can mind-control others, heal minds, and subdue others to stop them from harming anyone), Memory Manipulation (Removed Swamp Thing's memories), Smoke Manipulation (Can generate smoke screens), Pain Manipulation (Can remove the feeling of pain), Electricity Manipulation (Can generate electric fields around their owner which can be discharged in blasts), Magnetism Manipulation (Shattered chains with magnetic repulsion), Weather Manipulation (Can summon a raging storm with tornadoes and lightning to herald the death of a god), Summoning (Can summon their owner's equipment), Damage Boost (Can amplify and augment energy attacks and telekinetic power), Weapon Creation (Can arm their owner with New Genesis weaponry, including an energy sword capable of cutting into H/P Doomsday and an ultrasonic gun)

Resistance to Space-Time Manipulation (Prevented a spacetime vortex that destroyed everything around its center from harming Orion), Mind Manipulation (Can constantly protect against mental attacks), Fear Manipulation (Lightray's Mother Box freed him from a Reflektorr's fear inducement)

Intelligence: Mother Boxes are extraordinarily intelligent sentient supercomputers far beyond any Earth technology. They can perform advanced calculations and provide their owners with information and intuition, coming from their connection to the Source.

Weaknesses: Mother Boxes cease functioning if their wielders become spiritually inadequate, seen when Orion lost hope and succumbed to the temptations of the Anti-Life Equation.

Retrieved from "https://vsbattles.fandom.com/wiki/Mother_Boxes?oldid=4716061"
Community content is available under CC-BY-SA unless otherwise noted.