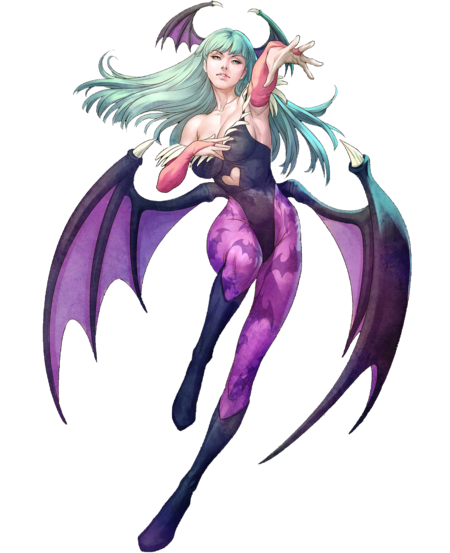 Morrigan Aensland is a succubus who was born in 1678 in a region of Scotland during a power struggle among the supernatural creatures, adopted by Belial Aensland who saw her essential in the preservation of the Aensland family and the Makai. To keep Morrigan's full power from consuming her, Belial split her soul in three and absorbed one fragment in his body while sealing the other away. Morrigan grew up ignorant her father's act to protect her from herself until she was of age to use her full potential, visiting the human world frequently for fun. One night, she was drawn to the strange power permeating from Pyron and ventured into the human world again.

After Morrigan returned to the Makai, she learned of Belial's death while regaining the soul fragment he kept from her. Although the rightful ruler of the Makai, Morrigan shirks her duties to maintain her lifestyle. But when Morrigan ends up in the Majigen dimension created by Jedah Dohma, she sensed Lilith, the now sentient remainder of her soul, and their eventual meeting would lead to Morrigan regaining her full potential.

Powers and Abilities: Superhuman Physical Characteristics, Longevity, Flight, Spaceflight, Can make her wings separate from her to form a cloud of bats, Duplication (Creates a clone to double-team opponents), Dimensional Travel, Self-Sustenance (Type 1 since she can cross universes. Crosses from Makai to the human realm and vice-versa with no effort), Intangibility, Can absorb the Souls/Power of her opponents, Resistance to Extreme Cold and Cosmic Radiations

Attack Potency: At least Multi-Solar System level, likely Galaxy level (Killed Pyron with a kiss in her ending. Comparable to Jedah Dohma and became superior to him after merging with Lilith)

Speed: Massively FTL+ (On the same level as Jedah prior to merging with Lilith)

Weaknesses: Dependent on stimulation, her own or the dreams of others, she can die if she does not feed after a certain amount of time she will die. At a younger age, she might destroyed herself due to being unable to control her power before Belial divided it.