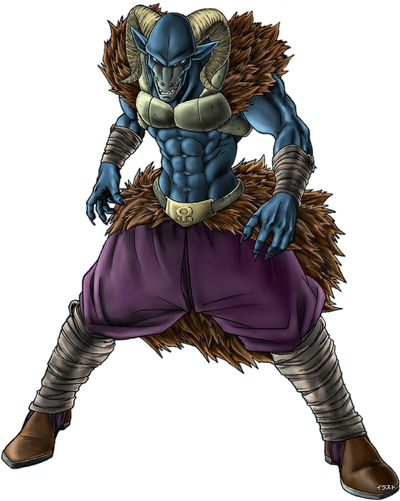 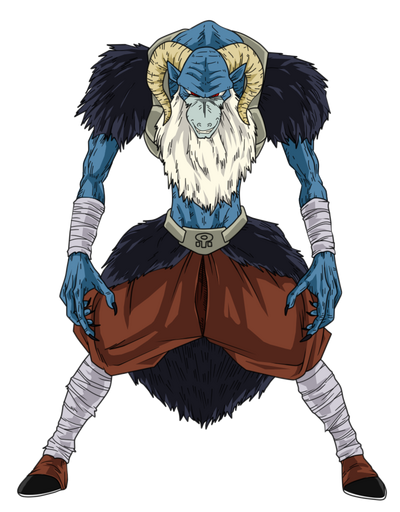 Moro is a powerful wizard who threatened Universe 7 about ten million years ago. His power proved to be so great that the Grand Supreme Kai needed to sacrifice his own godly power in order to seal him away. Now that his power has been returned after millions of years of imprisonment, Moro once again poses a threat to the Universe.

Superhuman Physical Characteristics, Skilled Martial Artist, Self-Sustenance (Type 1), Extrasensory Perception (Sensed Goku's attempt to locate him), Enhanced Senses, Ki Manipulation (Can be used defensively and offensively, to strengthen his skin or to fire ki blasts, which can home in on targets and form defensive barriers), Breath Attack (Can fire a beam of energy from his mouth), Longevity, Magic (Aura, Absorption of Souls, Life-Force and Ki, Statistics Amplification, Telekinesis, Electricity Manipulation, Fire Manipulation, Magma Manipulation, Heat Manipulation (Melted the bars of his prison with his magic), Telepathy, Can increase his lifespan through his absorption of Ki, potentially allowing him to live forever, Energy Manipulation, Flight, Spaceflight, Paralysis Inducement (Can encase his opponent's limbs in energy to immobilize them), Absorption (Can absorb opponents whole), Can possibly create dimensional rifts and destroy space-time and pocket dimensions with his energy via powerscaling, Resistance to Extreme Cold and Cosmic Radiation

All previous abilities greatly enhanced, Resistance to Extrasensory Perception (Able to hide his Ki signature to prevent himself from being sensed), Illusion Creation (Made a fake image of himself appear to distract Goku and Vegeta), Forcefield Creation, Afterimage Creation, Memory Reading (Examined the Grand Supreme Kai's latent memories), Power Bestowal (Granted power boosts to all of his allies, raising their Ki)

All previous abilities enhanced, Power Mimicry (Gained the ability of Seven-Three), Information Analysis (Gains knowledge on the abilities and techniques of those he copies), Has Piccolo's abilities such as Elasticity (Can stretch his arms great lengths), Size Manipulation (Can greatly increase his own size), Breath Attack, Danmaku (via Hellzone Grenade), Immortality (Types 1 and 3) and Regeneration (Low-Mid, Can regenerate lost limbs and heal most damage as long as his head remains intact), Has Vegeta's abilities such as Teleportation (Via Instant Transmission), Limited Soul Manipulation and Fusion Negation & Absorption Negation (Via Forced Spirit Fission), and Fusionism (Via Fusion Dance)

Stamina: High (Moro is able to last in a fight against both Vegeta and Goku, and due to his ability to absorb energy from his surroundings and his opponents, Moro is able to get continually stronger over the course of a battle while his enemies get weaker) | Very High

Intelligence: Gifted. Moro is an extremely skilled wizard with powerful magical abilities. He is also cunning in battle, concealing his true strength and capable of using underhanded methods to trick opponents.

Weaknesses: Moro must continue to absorb the life force from planets in order to stay alive

Ki Manipulation: Moro can manipulate his own ki for offensive, defensive and supplementary purposes.

Magic: Moro is an experienced and knowledgeable wizard with a variety of magical abilities.

Absorption: Moro encases his target in energy and forcefully eats them, absorbing them and allowing Moro to use their power and abilities. 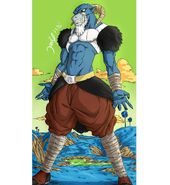 Moro after absorbing energy from Goku and Vegeta.

Moro after having his youth restored.
Add a photo to this gallery