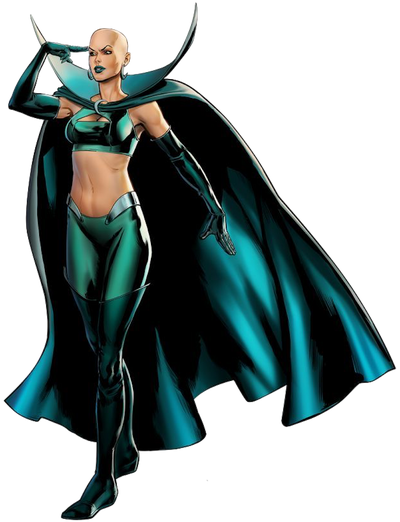 Heather Douglas was the daughter of Arthur Douglas. When Heather was still a girl, her father was driving her and her mother through the desert when they accidentally happened to see the spaceship of Thanos land; the space villain didn't want any witnesses, so he blew their car up. Heather was thrown clear off and survived, but her parents were killed. She was found by Thanos' father, Mentor, who took her to his homeworld, Titan, to be raised by the Titanian Shao-Lorn monks in their monastery. While there, Heather studied the Titans' ways and disciplines to unlock her latent psychic potential and gained her mental and physical powers. Dedicating her power to hunting down Thanos, who had returned and razed Titan, she came upon the Avengers and joined their ranks.

Powers and Abilities: Superhuman Physical Characteristics, Martial Arts, Body Control (Can ration her strength in small doses to survive hits), Acrobatics (As shown here), Genius Intelligence, Telepathy, Mind Manipulation (Controlled the population of the planet Ba-Banis to stop an ongoing war), Immortality (Type 6), Biological Manipulation (Can kill someone by overloading their nerve synapses, Restarted Marlo's Heart), Empathic Manipulation (Rid Quicksilver of his hatred and prejudice), Paralysis Inducement (Froze the Avengers in place), Sense Manipulation (Made Whirlwind feel dizzy. Gave Daredevil his sight back), Memory Manipulation (Showed Adam Warlock his memories), Psionic Blasts, Statistics Amplification (By borrowing others' mind-force), Power Bestowal (Bestowed her powers to Hellcat), Clairvoyance (Got a premonition for her presence being needed against Thanos), Extrasensory Perception (Sensed Drax's death), Information Analysis (Analyzed herself on a cellular level), Telekinesis and Explosion Manipulation (Blew a rocket to bits) | Same as before but to a higher extent, Creation (Created a spaceship), Can send someone to the Great One's mindscape, Immersion (Can pull out planets from the mindscape into the physical reality), Danmaku and Levitation

Weaknesses: She used to be emotionally unstable and suffer from a superiority complex, but does not seem to have these problems anymore.

Key: Base | With the Mind Gem

Retrieved from "https://vsbattles.fandom.com/wiki/Moondragon_(Marvel_Comics)?oldid=6215193"
Community content is available under CC-BY-SA unless otherwise noted.