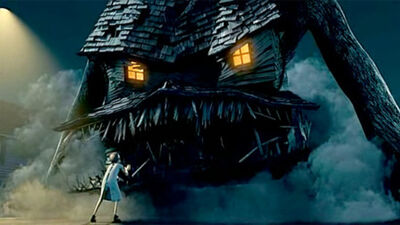 Constance Nebbercracker is the main antagonist of the 2006 animated film "Monster House." She was a morbidly obese woman unwillingly working in a circus freakshow, who grew to hate children for mocking and taunting her. In 1959 she happy married Horace Nebbercracker, but she tragically died one Halloween when she chased a child who taunted her and fell into the basement of their unfinished home. Once her husband finished construction of the house, however, her spirit possessed and brought it to life, attacking children who came too close.

Age: 29 at age of death. House is approximately 45 years old.

Powers and Abilities: Superhuman Physical Characteristics, Resistance to physical damage (Resisted being attacked by a excavator), Transformation (Can contort and move the house in seemingly impossible ways), Can move the house as easily as a human body, even using its carpet like a long tongue, Can control trees in its yard like arms or legs, Large Size (Type 1), Regeneration (High-Mid; can regenerate from demolishment if enough material and the furnace remains), Immortality (Types 7 and 8, possibly 3), Enhanced hearing, Berserk Mode, Can independently move furniture within itself, Light Manipulation, Electricity Manipulation, Rage Power, Non-Corporeal (Is possessed by the spirit of Constance Nebbercracker, who has this)

Attack Potency: At least Small Building level, possibly Building level (By sheer size. Capable of lifting and crushing a police car with ease, ate an excavator and destroyed it)

Speed: Unknown (Kept up with the protagonists on foot)

Lifting Strength: Class 5 (Her tree limbs can easily lift cars), possibly higher via sheer size (Walked on her tree limbs, wrestled with an excavator, pushed it over a cliff and ripped its claw off)

Range: Tens of meters with tree limbs and carpet tongue

Standard Equipment: Two large trees. All of the furniture within its interior

Weaknesses: The furnace is the spirit's "heart", and her control over the house will cease if it is destroyed. Rage can sometimes cloud judgement