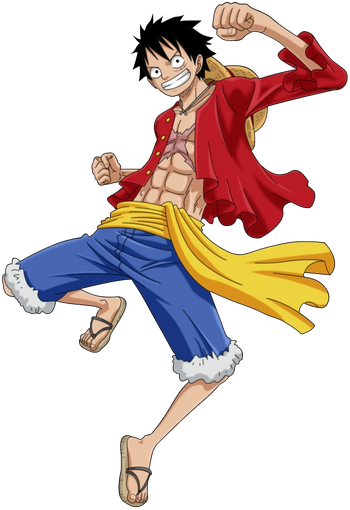 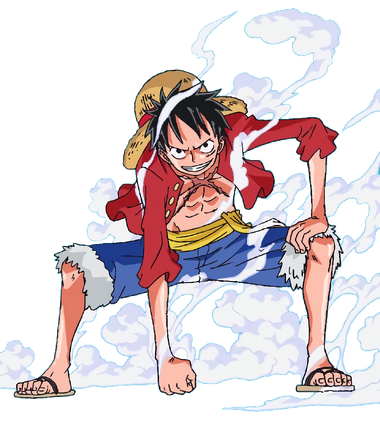 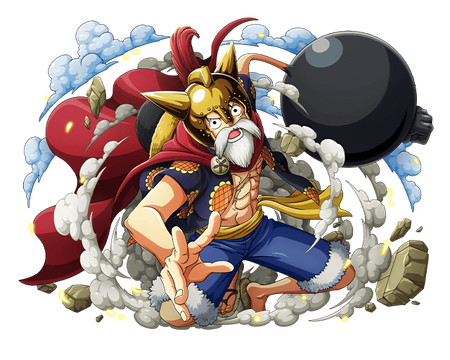 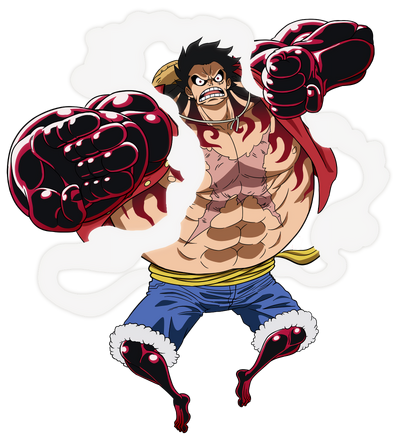 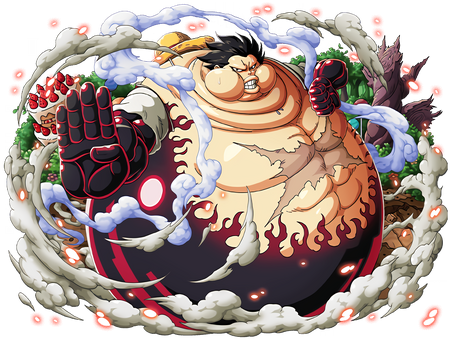 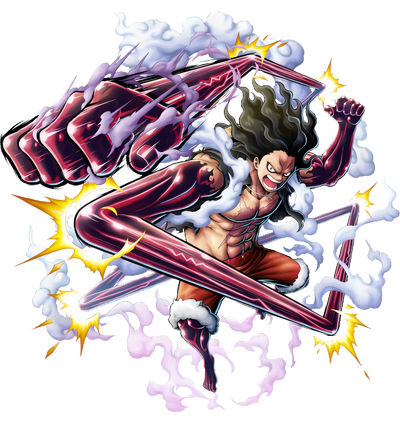 Monkey D. Luffy, known as "Straw Hat Luffy", is the main protagonist of the manga and anime, One Piece. He's the son of Monkey D. Dragon, a revolutionary considered “The World's Most Dangerous Criminal”; the grandson of Monkey D. Garp, a powerful Marine Vice-Admiral who had cornered the late Pirate King himself on several occasions; the sworn brother of late "Fire Fist" Portgas D. Ace and Revolutionary chief of staff Sabo; and the foster son of Curly Dadan. He seeks to find One Piece and become the Pirate King; to accomplish this, he founded the Straw Hat Pirates and set out on the high seas at age 17 in search of the elusive treasure, beginning a series of increasingly odd and dangerous adventures. He has eaten the Gomu Gomu no Mi, which gives him stretching powers that he has become quite a master of and he's quite creative with them as he has developed two unique techniques with them: Gear Second, which makes him much faster, and Gear Third, which allows him to inflate any body parts for a stronger attack. During the time-skip, he has a new technique: Gear Fourth, which makes him much stronger and faster than even the other two Gears, but with a considerable cost to it. With the support from Silvers Rayleigh and the desire to reunite with his crew after the Sabaody Island Incident and the Marineford War, he endured vigorous training on the island of Ruskaina where he learned different the 3 forms of Haki and out of the three; he specialized in “Haoshoku Haki”.

His dream of becoming the Pirate King comes from an incident in his youth involving mountain bandits and a seaking that resulted in his idol Shanks losing his left arm. Before leaving Luffy's village the very next day, Shanks gave him his straw hat, telling him to give it back when he's become a great pirate.

Luffy is quite notorious for battling powerful individuals and organizations wherever he goes, and regularly poses a threat to the balance of the world by challenging the Seven Warlords of the Sea, the World Government and now the Emperors and so far has managed to either win completely or escape by a hair's breadth. Through word of his various exploits and victories spreading around, he's already become one of the most infamous and feared pirate captains in the world after the timeskip. He's also counted as a member of "The Worst Generation", a group of 10 other rookie pirates as well as Marshall D. Teach who are all considered being major figures in shaping the New Age of Piracy following the Paramount War.

Luffy has his own signature laughter style, which is "Shishishishishi~".

Following the events of the Whole Cake Island Arc, Luffy's successful ‘raid’ against the Emperor Big Mom, the complete destruction of her castle, and his defeat of her two top Commanders was made public knowledge by the journalist “Big News” Morgans. Furthermore, the formation of the Straw Hat Grand Fleet and the addition of a former Warlord to his main crew, Jinbe, are also revealed to the masses. For this, certain circles now unofficially consider Luffy to be the “Fifth Emperor of the Sea”, effectively making the “Yonko” technically the “Goko”; he has become unambiguously recognized as one of the most powerful individuals in the world with an enormous bounty to match.

Superhuman Physical Characteristics, Master Hand-to-Hand Combatant, Enhanced Senses (Smell and Instincts), Elasticity and Body Control (Via Gomu-Gomu no mi), Limited Attack Reflection (Only on physical objects), Acrobatics, Accelerated Development (Battle and with sheer motivation; abilities and physical stats), Enormous Willpower (Enough to take in 100 shadows into his body without passing out when 2-3 is considered the limit for normal people), Minor Rage Power, Social Influencing (Stated to have the ability to gain allies wherever he goes, turned the man-hating woman Boa Hancock into loving him and gained allies on former enemies), Regeneration (Mid-Low, capable of recovering from life-threatening injuries in mere hours while supplementing his body with meat [stab wounds completely piercing his torso], or regrow a lost tooth by drinking milk. Can otherwise recover from said injuries within a couple of days), can turn off his mind, Minor Adaptation (Adapted to the oxygen shortage), Limited Non-Physical Interaction (Can interact with beings made of pure electricity), Statistics Amplification (Via Gear 2nd and Gear 3rd), Afterimage Creation, Size Manipulation (Via Gear 3rd), Limited Fire Manipulation, Explosion Manipulation and Durability Negation (Via Red Hawk), Electricity Manipulation (Via Thor Elephant Gun), Air Manipulation (Via Eagle Bazooka), Pseudo-Levitation (Via Gomu Gomu no UFO), Transformation and Pseudo-Flight (Via Gear 4th), Proficient Observation, Armament and Conqueror's Haki user, Minor Homing Attack (Via Culverin and Phython), Minor Resistance to Resistance Negation (Able to resist Doffy’s Busōshoku Haki and keep his rubbery body), Resistance to the following: Blunt Force Trauma (Due to being rubber), Fire Manipulation, High Temperatures, Electricity Manipulation, Poison Manipulation, Cold Temperatures and Corrosion Inducement

Same as before, Advanced Armament Haki user, Minor Resistance to Power Nullification (Was able to somewhat resist the effects of Seastone with his willpower alone)

Stamina: Immense. Has an incredibly high endurance and recovery speed. Luffy's capable of lasting in brawls for nearly a dozen hours with no rest. During his more serious fights, Luffy had suffered life-threatening injuries that gave him severe internal bleeding and damage to his organs, and he could continue fighting with only moderate lapses. He only stops fighting when it is physically impossible for him to even move. He took several strikes from Rob Lucci that affected all of his organs and left him in a large puddle of his own blood, yet he could stand back up shortly after and withstand the same attack immediately after. After the Marineford war Pre-Timeskip, Luffy suffered from severe physical and mental trauma due to the loss of his brother, his life-threatening injuries, and having to use adrenaline-based drugs more than once to keep fighting, only to merely pass out and go on a rampage several hours later immediately after going through surgery and being in perfect condition sometime after. During his fight with Katakuri, Luffy had only slept for a few hours for the last days, and was vomiting blood, barely conscious, and taking a beating, yet could continue fighting quite effectively, which surprised his opponent. He is capable of fighting for over 13 hours despite having suffering severe injuries all over his body and shrugging off a fatal injury that tore off one side of his torso.

Range: Up to tens of kilometers. He should be capable of reaching further distances currently. The range of his Haoshoku and Kenbunshoku Haki Post-Timeskip should at least be comparable, if not larger than this.

Intelligence: Combat genius (Developed his own fighting style, assimilating his unique rubber physique with a mobile brawling approach to battle), prodigious aptitude for battle (keenly seizes the developments of fights to his advantage, doesn't waste any movements during battle etc.), expertly uses his rubber body in creative ways (developing his snap-back techniques to enhance the power of many of his attacks, coming up with Gear Second and Gear Third, using his stretching capacity to his benefit in battle etcetera), extensive battle experience fighting many different kind of adversaries; simpleton when not in combat

Weaknesses: Standard Devil Fruit users weaknesses. Excessive usage of Gear 4th renders Luffy unable to use Haki for 10 minutes. Gear 4th greatly increases Luffy's metabolism, making his body burn calories much faster and greatly lowers how long he can remain in combat. Gear 4th Tankman Full Version can only be utilized when Luffy has consumed a sufficient amount of calories | Same as before. However, after improving his Haki in the Wano arc, he doesn't suffer the same drawback when using Gear 4th, being able to activate and deactivate it at will without suffering any notable toll and being capable of using his King Kong Gun without losing too much stamina in the process.

A Paramecia type Devil Fruit, this fruit turns the user’s body into rubber. The fruit’s major strength, as demonstrated by Luffy, is that the person can stretch their body like rubber at will, and makes them almost entirely immune to blunt attacks. The user’s ability to stretch and twist like rubber to extreme lengths not only makes them immune to injuries that originate from such, but it also allows the user to drastically increase the range of what would otherwise be a powerful close range attack, turning it into a devastating mid range attack. A stretched limb can also be used to store potential energy like a stretched spring, increasing the power of an attack. Owing to rubber’s insulating properties, the user is also highly resistant to electrical attacks.

Atama Buso: Gomu Gomu no Kane
Add a photo to this gallery

Luffy pumps his blood rapidly with his legs to kick start the process which in turn, increases the speed of his blood flow, thus providing more oxygen and nutrients to various parts of his body which makes him faster and much stronger. It uses even more oxygen and energy, hence using up more food and he has to breathe harder. The increase in his metabolism causes him to be hungrier than usual or even a paralytic type effect after a long usage of it. Can be used to achieve a full body effect, or an effect on any single area of his body (e.g. the arm). The techniques in this mode are basically the same as the regular attacks, but greatly augmented by his enhanced attack speed and, consequently, attack power. The known Gear Second specific techniques are listed below.

Red Hawk in the anime
Add a photo to this gallery

Luffy pumps air through his bones to make them gigantic. This gives his arm more mass and a larger area to attack with far greater strength. Previously Luffy turned into a chibi form after canceling the technique but after the timeskip he no longer shrinks in size. The techniques in this mode are basically the same as the regular attacks, but greatly augmented by his increased mass and power. The known Gear Third specific techniques are listed below.

Elephant Gatling
Add a photo to this gallery

In order to activate the technique, Luffy coats his arm in Busoshoku Haki before biting into his forearm. Similar to how he activates Gear Third, he blows an incredible amount of air into his body, but this time he inflates his muscular structure before distributing the air throughout his body, with emphasis on his upper half. Luffy's proportions become warped and his body becomes much larger in size, with his arms, upper torso, and legs coated in Busoshoku Haki. The coating across his torso resemble the wispy ends made from flames, giving it the appearance of tattoos, and he also gains shading around the inner and outer edges of his eyes. Gear Fourth also increases Luffy’s metabolism. Once Gear Fourth reaches its limit, it automatically deactivates and Luffy is left exhausted and unable to use Haki for ten minutes. Even afterwards, Gear Fourth is extremely taxing on Luffy's body and stamina.

Luffy traps his enemy inside his massive stomach

Then he launches the opponent with the force of his stomach to...

Cannonball!!
Add a photo to this gallery 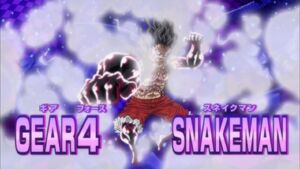 Black Mamba
Add a photo to this gallery

Luffy's outfit in the 15th Opening

Luffytaro
Add a photo to this gallery

Jinbe (One Piece) Jinbe's Profile (High 7-A versions were used)

Scizor (Pokémon) Scizor's profile (7-A versions, both could use their High 7-A forms, speed equalized)

Gyarados (Pokémon) Gyarados' profile (Both started in base but could transform)

Shinji Ikari (Neon Genesis Evangelion) Shinji's profile (Both started in 7-A and Shinji's EVA could go berserk. Speed was equalized)

Lucario (Pokémon) Lucario's profile (Whole Cake Luffy was used, both could use their High 7-A forms)

Metagross (Pokémon) Metagross' profile (Both started at 7-A and could transform, speed equalized)