Monkey D. Dragon is the father of Monkey D. Luffy and is also the son of Vice-Admiral Monkey D. Garp. Known as the Revolutionary Dragon, he is the world's most wanted criminal, and another one of the several characters given the middle initial "D". He has had his revolutionary ideas spread throughout the world and has taken several nations. He is also the only member of the D. family to look serious, partly due to his strange facial mark. Despite being an enemy to the World Government, he still keeps contact with his father.

Before the start of the series, Dragon left Luffy in Garp's care. Dragon first appears after a lightning bolt suddenly destroys the gallows where Luffy was to be executed by Buggy the Clown and then saves Luffy from being captured by Captain Smoker. When he saved Luffy from Smoker, a mighty gust of eerie wind swept through Loguetown. It is undetermined whether or not he was the cause behind the gust of wind or the lightning; however, the story leads to believe there is more to him than it seems. Recently, he has taken over an island in the South Blue and is about to head to the North Blue when he commented, after noticing Luffy's newest bounty, given to him after invading Enies Lobby, that father and son will meet sometime soon.

Powers and Abilities: Superhuman Physical Characteristics, Air Manipulation or Weather Manipulation (Appears to have some kind of ability connected to wind, given Ivankov stated there is always wind blowing around him), Possible Electricity Manipulation (Most likely brought down a lightning bolt intended to save Luffy from Buggy)

Attack Potency: Unknown (Has been given status as the most dangerous man in the world)

Stamina: Superhuman, exact extent is unknown but should be extensive given One Piece standards

Intelligence: World-class military commander with phenomenal ability to marshal troops (in just a few years time, he has built the Revolutionary Army into a legitimate threat towards the World Government with his inspiring charisma and mystical insight), presumably a highly adept fighter given his status 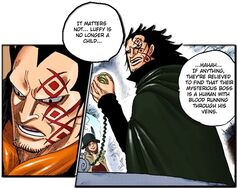 Retrieved from "https://vsbattles.fandom.com/wiki/Monkey_D._Dragon?oldid=5399175"
Community content is available under CC-BY-SA unless otherwise noted.