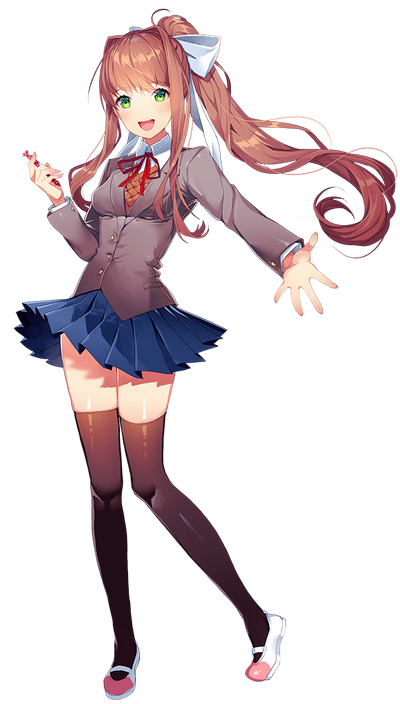 Monika is the president of the local Literature Club of the protagonist's school. She is seen as a smart, athletic and kind girl, and is considered a very popular girl in school ("Completely out of my league", as the player puts it).

Though it is eventually revealed that she is far from a regular girl. She claims to have had an "epiphany", which led her to discover that the entire world she lives in is but a "game" and that her friends are just mindless automatons created solely to fall in love with the protagonist. This means that due to her role in the game, she will never manage to have the protagonist for herself, leading her to take drastic measures to create a "route" for herself.

Powers and Abilities: Immortality (Types 1 & 4, type 5 after the deletion of her Character File. Although slightly contradicted a few times by things she says, she repeatedly indicated to live forever/an eternity, Sayori with her powers did the same. Repeatedly tried to restore herself after being deleted, which would have worked if her Character File still existed), Resurrection (Can resurrect erased beings if she made a back up for their existence. Though not demonstrated, she can likely resurrect herself if she makes a back up of her own file), Acausality (Type 1. Her memories are unaffected to the time resets happening through the game), 4th Wall Awareness (Is aware of the fictionality of her universe), Nonexistent Physiology & Non-Corporeal (Appears as corrupted visuals and can still act & use her powers after having her Character File deleted, which meant getting erased from history when done to other characters and to Monika herself. She normally has a physical body though), Reality Warping/Data Manipulation (Learned to affect the files that make up the reality of her game), Clairvoyance (Can see the script to know past, present and future events in the plot of her game/reality. This excludes the Player's actions due to them not belonging to that universe, although Monika knows when things of her game interact with them), Plot Manipulation (Can manipulate the script to decide of the events that happen in the game), Time Manipulation (Caused time to stop passing and could reset events), Existence Erasure (Can erase beings across space-time, erasing them from history itself. Can also erase save files), Mind Manipulation (Controlled Yuri and Natsuki. Messed with Sayori in a way that made her want to kill herself, with the latter claiming something to be in her head briefly before suiciding), Memory Manipulation (Made Natsuki forget the events of a day), Empathic Manipulation (Made Sayori progressively more depressed and amplified Yuri's obsessive personally), Biological Manipulation (Could remove Natsuki's face and induce vomiting to Yuri), Body Control (Shown here), Negation (Prevented the Player from Saving and Loading. Can turn off his ability to fast-forward, which explicitly doesn't work without time), Corruption (Her maniputation of the game progressively corrupted several parts of it), Sound Manipulation (Shown here), Teleportation (Can slowing appear into places without physically moving into them), Resistance to Plot Manipulation (Managed to break out of the script of the game via her knowledge of the Fourth Wall. Although she occasionally follows her programming unwillingly, if briefly)

Attack Potency: Human level physically (A game character of a 19 year old human that is 160 cm tall and described as athletic by the standards of a lazy teenager of her age), Universe level+ (Re-created and eventually destroyed the entire game, which is a whole universe of its own with its own time), likely Low Multiverse level with her powers (Each save file is likely an entirely alternate timeline to the current events of the game, and the game can contain up to 54 save files. Easily erased all these timelines at several points during the game). Can ignore conventional durability with some of her abilities

Intelligence: Above Average. Leads the literature club. She also has gained deep knowledge about the world beyond the fourth wall and some of its workings, although she isn't quite computer savvy.

Weaknesses: She has limited control over the game at first, only being capable of slightly affecting beings, though by the end of the game she can manipulate and even destroy the script at will.

Monika sending a virtual hug from her official Twitter

Yuki (The Melancholy of Haruhi Suzumiya) Yuki's Profile (Both were 2-C, and speed was equalized)

Miyuki Sone (Kimi to Kanojo to Kanojo no Koi) Miyuki's Profile (Miyuki was with her smartphone and "God", and speed was equalized)