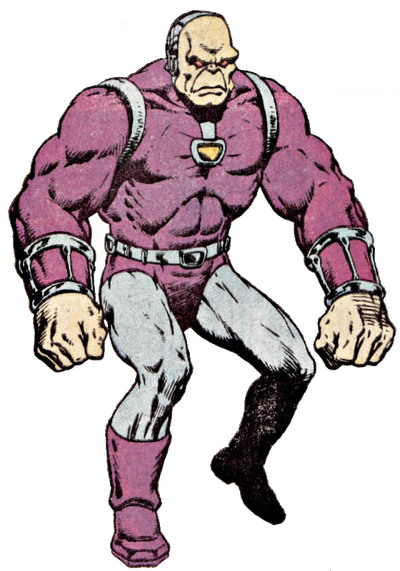 Mongul is an alien warlord who repeatedly came into conflict with Superman in his attempts to conquer the universe. He is powerful, ruthless, and very intelligent, preferring to plan things ahead of time whenever possible. He formerly ruled over an entire world but was forced to flee when his people were driven to religious revolt. He went on to gain incredible power and spent the remainder of his days plotting his conquest, ultimately falling victim to his own black mercy.

Powers and Abilities: Superhuman Physical Characteristics, Genius Intelligence, Energy Projection (Can fire blasts from his eyes and hands), Teleportation (Can teleport himself and his ship away at an instant's notice), Limited Telepathy (Can detect feelings), and Sealing and Size Manipulation (Can trap and shrink targets in dimensional inversion cubes which absorb their power)

Durability: Low Multiverse level (Tanked a full-power barrage of attacks from Superman. Wonder Woman hurt herself from punching him)

Stamina: Very high, can fight several comparable opponents at once without tiring

Range: Interstellar with teleportation and sensors

Standard Equipment: Circuit-enhanced suit that can generate and control dimensional inversion cubes and access teleportation. Gained access to black mercies before his final confrontation with Superman, which trap their target in a never-ending dream.

Retrieved from "https://vsbattles.fandom.com/wiki/Mongul_(Pre-Crisis)?oldid=4674449"
Community content is available under CC-BY-SA unless otherwise noted.