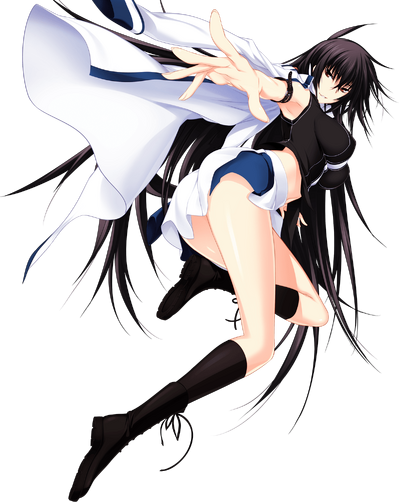 Momoyo Kawakami is the main heroine and the primary female protagonist in the Maji De Watashi Ni Koishinasai! Visual Novel game. She is the "older sister" of the Kazama Family, and one of the last members to join.

Momoyo is the heir to the Kawakami Ryuu style of kenpo, and one of the strongest characters in the series. Her daily life consists of answering challenges, taking cute girls out to lunch, borrowing money from people due to her own unwillingness to get a part-time job.

Powers and Abilities: Superhuman Physical Characteristics, Martial Arts, Extrasensory Perception (Samurai girls can sense gazes, even if it's indirect. Can sense presences in a 2km radius[1]) | Same as before plus Energy Manipulation, Body Control (Samurai Girls have perfect control over their body[2]), Regeneration (High-Mid; Can regenerate from blowing herself up[3]), Chi Manipulation, Black Hole Creation (Can create black holes[4]), Time Stop (Can stop the time of everything within 20m of her[5]), Self-Sustenance (Type 1. By coating herself with a veil of spirit, she can survive in space[6]), Aura (Can use her aura to destroy her targets[3]), Forcefield Creation (Using her aura she can create barriers[7]), Self-Destruction, Fire Manipulation (Can turn her aura into a roaring flame to attack her enemy[3]), Ice Manipulation (Can turn her aura into ice to freeze her enemy[3]), Pseudo-Flight (Fought Ageha and Yukie in the sky[3]), Air Manipulation (Can create air bullets[8]), Mind Manipulation (Martial Artist of the Assistant Master level can use their fighting spirit to overwhelm their opponent and take over their consciousness, Momoyo can also trap her opponents in a nightmare[9]), Body Puppetry (Can control the body of others[10]), Heat Manipulation (Using her ki she can create a mini-sun which produces heat[9]), Water Walking (Can walk on water if she wants to[11]), Light Manipulation, Attack Reflection (Can repel her enemy's attacks[5]), Spatial Manipulation (Can swap places with others[4]), Can take on the characteristics of living beings[12], Portal Creation (Can use black holes to travel to other worlds), Resistance to Fire Manipulation (Unaffected by Wu Song's fire[13]), Biological Manipulation (All Miyako's female friends can resist[7] the sensitivity of their bodies being multiplied[7]), Sealing, Sleep Manipulation, Poison Manipulation (Status infliction's such as sleep or poison are ineffective against her[11]. Those who have surpassed the limits of human strength are immune to all but a handful of poisons), and Conceptual Manipulation (Can nullify conceptual attacks[4]) | Same as before plus Shapeshifting (Can turn into a dragon), Electricity Manipulation

Attack Potency: Wall level (Comparable to Margit Eberbach) | Planet level (Her planet destroyer has repeated been stated to be capable of destroying[14] the planet[15]. During Momo's battle with Hyumu Hume Hellsing, they had to take it off the planet and battle in space so as to not destroy the planet during their battle as they went all out against each other. Characters like Hume and Otomo have been able to tank her planet destroyer and she is capable of harming them) | Planet level (Stronger than before)

Speed: Supersonic (Comparable to Margit) | FTL (Can move faster than the speed of light[4]) | FTL (Faster than before)

Striking Strength: Wall Class | Planet Class (During her battle with Hume they had to literally take their fight into space due to the fact that the planet itself would not be able to withstand their battle. A dome arena had to be specifically made so that they could fight in space, but they later abandoned it to fight in space when they started firing their strongest planet attacks) | Planet Class

Stamina: She can battle for hours on end and can perform thirty complete instant recoveries daily.

Intelligence: Momoyo is shown to be a decent student academically, but only when she puts her mind to it. For the most part, she gets very low grades but ends up making up for it by earning a decent passing grade if things get too close. She has however been shown to be a great martial artist being able to see through and counter her opponents techniques having fought them for a small amount of time.

Weaknesses: Momoyo is scared of ghosts and spirits, as she feels that nothing she can do will affect them. Momoyo is also overconfident due to having never lost a battle in her life.