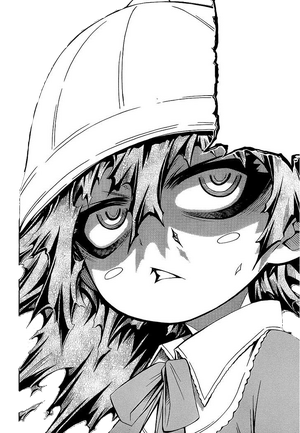 Momo Momozono (桃園 喪々, Momozono Momo) is one of the 6 suitors who competed in the second jet black wedding feast to try and win Medaka’s hand in marriage. She functioned as the informal leader of the suitors and is the main antagonist of the Jet Black Wedding Arc. She is also by far the youngest and seems to be in elementary school. Despite her age, she is very cunning, and not afraid to play dirty. She is almost always seen eating.

During the Epilogue Arc, 10 years later, she is shown to be attending high school at Hakoniwa Academy. She has become the new student council president.

Tier: Unknown, At least 8-B. Unknown with Labels

Age: Unknown, between 5 to 8 during the Jet Black Wedding Arc and 15 to 18 during the Epilogue Arc

Powers and Abilities: Superhuman Physical Characteristics, Sealing, Paper Manipulation (Can manipulate name cards), Durability Negation, Power Nullification (Can negate Regeneration and Resurrection of those she seals, among other abilities), Resistance Negation (Managed to seal Hanten Shiranui for almost a week despite his resistence to it), Pseudo Time Dilation, Minor Biological Manipulation (Can control the biological clocks of her targets), Word Manipulation, Vibration Manipulation, Sound Manipulation, Power Bestowal, can ignore plot-based abilities to an extent

Attack Potency: Unknown, At least City Block level (Should be comparable to the other Style Users). Unknown with Labels (Her style bypasses durability)

Speed: At least Speed of Light (Should be comparable to other Style Users. Was stated to have engaged in combat with Mogura in the past)

Intelligence: Genius (Although she eventually lost to Medaka in a game of words, she successfully manipulated her multiple times. She is also able to grasp the warped logic of Kumagawa)

Weaknesses: Styles are ineffective against frenzied enemies and enemies that cannot understand words, however, she can seal them while they are mostly incapacitated or dead. Significantly skilled people, such as Ajimu Najimi, can escape her style after a few days. Cutting out the tongue of a style user can take away their style. Her time dilation effects both enemies and allies.

Labels: Like all Styles, she has the ability of weaponized language. Her power is to seal her targets into name cards. The powers of those who are sealed cannot be used to escape into or affect the outside world, and external powers cannot affect those that are sealed. She can instantly seal several targets at once. This style is perfect for taking out self-confident immortals, and she uses it to finish the battle in one move. It is also a great technique for taking hostages, since she can kill people after she seals them, likely by destroying the card. By sealing a dead or incapacitated target, she can prevent them from being resurrected or healed. It is implied she may even seal her targets into a lower dimension. It should be noted that Styles are not considered “powers” in the conventional sense, and are better thought of as a sort of “technique” or a weaponized Writing Style. Because of their odd properties, Styles are more tricky for abilities such as Power Nullification to function properly on them. The vibrations of styles can be used to somewhat bypass defensive abilities as well.

Medaka Kurokami (Medaka Box) Medaka's Profile (Altered God Mode Medaka. Both have intel as far as they would have at that point in the series)

The Thing (John Carpenter's The Thing) The Thing's profile (Speed Equalized, fight happened in a school building, the Thing was divided into a dozen smaller forms, Momo knows not to touch it)