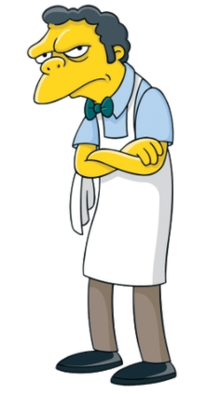 Moe Szyslak is the bartender in Springfield. He spends most of his time in his bar selling drinks to his usual customers and friends Homer, Lenny, Carol, and Barney. He as well is shown to run illegal practices like holding and selling animals like Pandas and Orcas in the back of his bar. He is a often sneaky and lazy bar keeper. Refusing to clean his bar, and pulling quick ones on his customers. However, he can and still does feel guilt and compassion towards his closer friends like Homer, and will go out of his way to help them.

Powers and Abilities: Superhuman Physical Characteristics, Extrasensory Perception (Can see ghosts), Regeneration (Mid, Had his entire body crushed and bones broken by an elevator and healed very quickly, Had his skull completely flattened and healed from it near instantly), Toon Force, Martial Arts (A skilled fighter. He used to be a boxer), Weapon Mastery (Is skilled with range weapons and a deadly shot, has military training), Enhanced Senses, Social Influencing (Extremely manipulative), Mind Manipulation (Could enter into Homer's thoughts, created a memory erasing drink), Resistance to extreme pain (Has sadomasochistic tendencies. Took a beating from Ned Flanders with little reaction. Got crushed by an elevator and was only happy by it)

Attack Potency: At least Building level+ (Comparable to Homer Simpson. Destroyed his entire bar with a swing of a sledgehammer)

Stamina: Extremely High (Survives constant suicide attempts with little signs of fatigue, Stood outside a house for several days with no rest and was fine, has worked for 3 days straight without the need to sleep and was only irritated at worst, He was trained in the military and used to be a professional boxer)

Range: Standard melee range, Dozens of meters to Hundreds of meters with guns

Intelligence: Gifted (Runs shady and illegal practices, as well as attended college, despite having dozens and possibly hundreds of health code violations, he continues to trick and or outsmart the health inspectors who attempt to shut down his place. Trained in fighting skills like boxing, is a skilled shot with most guns. Created a drink which can erase someones memory)

Weaknesses: Tends to be suicidal at his worse, has a short temper