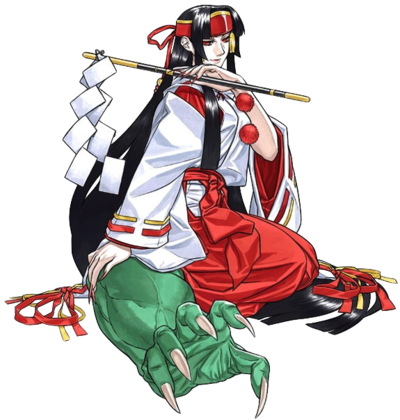 Mizuki Rashojin (羅将神 ミヅキ, Rashōjin Mizuki), with Rashōjin roughly translating as "The Marauding Deity", is the final boss in Samurai Shodown II. She is also the first and only boss of the series to have assistance from a pet.

Tier: 7-B, higher with Ambrosia

Attack Potency: City level (Stronger than Nakoruru and defeated Amakusa without his evil half), higher with Ambrosia (When Mizuki resurrected Ambrosia, it blanketed and tainted the entire planet in a dark purple sky)

Retrieved from "https://vsbattles.fandom.com/wiki/Mizuki_Rashojin?oldid=6232775"
Community content is available under CC-BY-SA unless otherwise noted.