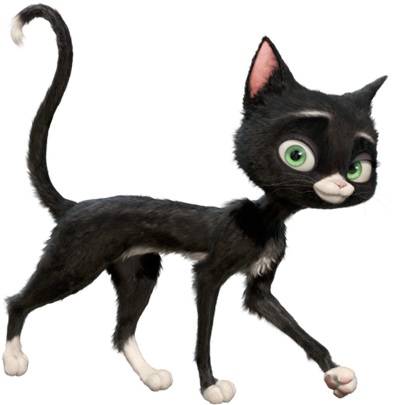 Mittens is the deuteragonist of Disney's 2008 animated feature film Bolt.

She is a sassy and short-tempered street cat whom Bolt at first believed was an agent of Dr. Calico. She is pessimistic and has a dry sense of humor. She lives the life of a thief who suffers from traumatophobia (a fear of battle and physical injury). She wasn't interested in friendship at first but she is eventually moved by Bolt's loyalty. Judging by her color patterns, she appears to be a Tuxedo cat who speaks with a New York accent.

Powers and Abilities: Small Size (Type 1), Superhuman Physical Characteristics (Speed and Senses: A cat can see between 6 and 8 times more than people. They have a field of vision of 200 degrees, while that of humans is 180 and can detect the mood of its owner. Their whiskers are like sensors. An average cat can reach more than 50 kph in short bursts. Known to be an incredibly agile animal with fast reflexes.), minor Disease Manipulation via Toxoplasmosis (Cats host this disease, and have infected a large portion of the world population with it.)

Attack Potency: Below Average level (Being a Domestic Cat will make her this strong)

Speed: Below Average Human (Because of her small size, her walking/movement speed is lower than that of a human), Superhuman short burst speed (48 km/h), combat speed and reactions