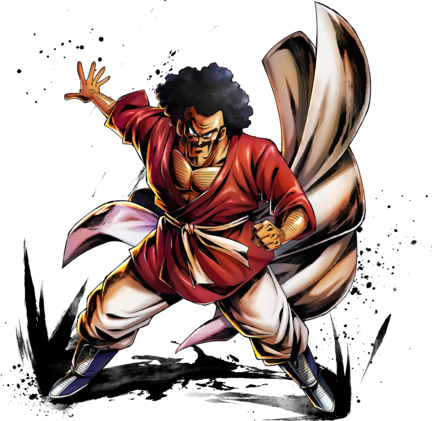 Tier: 9-B, higher with explosives

Age: 44 during the Universe 6 Saga

Attack Potency: Wall level (Smashed 14 stone tiles with a chop and punched through a bus. Can trade blows with those capable of harming him), higher with explosives

Speed: Subsonic (Can move so fast regular humans view him as teleporting), possibly higher (Reacted to a mini-missile launched at him), Supersonic attack speed with gun

Lifting Strength: Class 5 (Can pull four buses on his own and rip three phone books in half, which would take that much force)

Durability: Wall level (He was injured by a bullet, but kept going. Survived the reaction force on chopping stone tiles and a casual slap from Cell. Also survived being smacked into a wall)

Stamina: Very high (Was able to stand after being heavily damaged)

Standard Equipment: Has various weapons and poisons in a duffel bag, jetpack

Intelligence: Above Average (Mister Satan tends to be stupid on several occasions, his buffoonish personality makes him seem less intelligent than he is, but he has a great knowledge of the martial arts due he was the champion of the Budokai Tenkaichi. He is a martial artist and master of combat tactics)

Weaknesses: He possesses most normal human weaknesses, but has survived situations which would kill an average human, he has no counter for energy attacks, he wouldn't use his equipment if there were witnesses around for the sake of his reputation.

Gaston (Disney) Gaston's profile (Speed was equalized. Gaston and Hercule had no equipment)

Jon Snow (A Song of Ice and Fire) Jon's profile (Speed was equalized. Hercule had no explosives)

Legosi (Beastars) Legosi's Profile (Both were 9-B, speed was equalized, and Satan didn't have explosives)