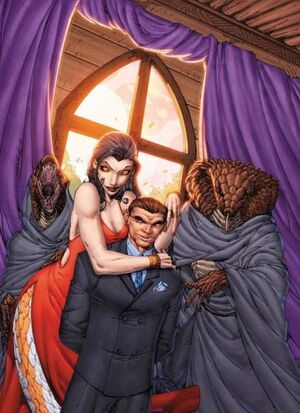 Mister Oliver, also known as "the Earthmover," was a member of the Vampire Council and, to his knowledge, the oldest living vampire. Oliver was approximately 4 feet tall, with a sloping brow, absent chin, and expensively cut blow-dried hair. Because it was suggested that Oliver was a member of the Homo erectus species, a pre-human vampire, Anita estimated his age at approximately one million years.

Attack Potency: At least Continent level (Created the modern setting of the Continents from Pangaea)

Note: About Oliver's durability: He was easily killed by Anita in the book, although it's unknown if it was due to PIS or Oliver's weakness to the Triumvirate.

Retrieved from "https://vsbattles.fandom.com/wiki/Mister_Oliver?oldid=4628545"
Community content is available under CC-BY-SA unless otherwise noted.