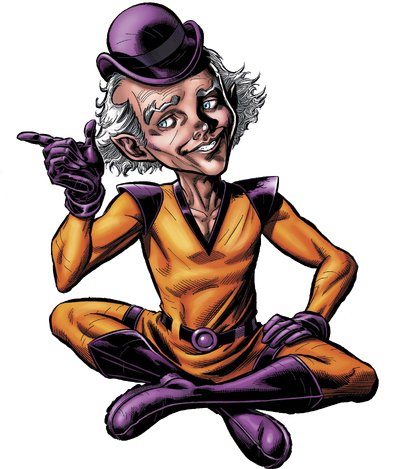 Mister Mxyzptlk is a whimsical, reality bending imp from the 5th dimension and a frequent foe of Superman. Rarely malicious, Mxyzptlk spends his days waiting for opportunities to mess with his favorite Kryptonian, killing time with every alternate version of Superman to ease his boredom. Despite his childish and playful tendencies, he is a dangerous entity to ignore, as his god-like abilities allow him to bend space and time to his whim, making him a truly terrifying opponent if he feels like "playing supervillain".

Attack Potency: Low Complex Multiverse level (A 5th-Dimensional being who transcends time across all infinite universes of the multiverse, being one with all infinite versions of himself. Compared to him, 3-D beings are spatially flat), able to ignore durability in many ways

Speed: Immeasurable (Exists beyond time. 5D Imps can freely move through time and Hypertime. Perceives all past, present and future across all universes simultaneously)

Intelligence: Nigh-Omniscient. Mr.Mxyzptlk exists as a single entity across all universes, perceiving all of time simultaneously. As the Mxy Twins, he wrote the Encyclopedia Universal, a book containing virtually all information on everything in existence

Weaknesses: His comical and lighthearted personality means that he rarely acts seriously or uses a fraction of his true power. Will be banished to the 5th Dimension for up to 90 days if he is forced / tricked to speak or write his name backwards. However, this weakness is self-imposed and can be ignored should Mxyzptlk desire.