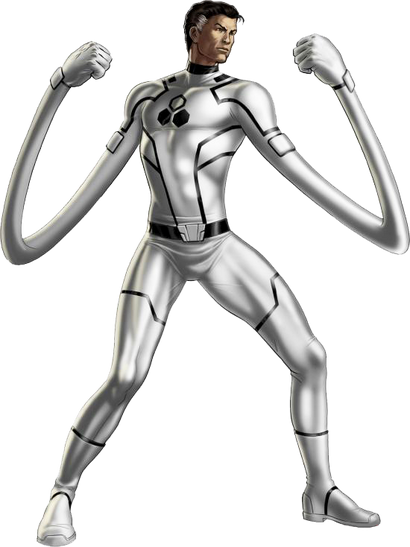 Reed Richards, better known as Mister Fantastic, is the leader of the Fantastic Four and the head of the Future Foundation. A nearly unparalleled scientist, he invited his colleagues Susan Storm, Johnny Storm, and Ben Grimm to test an experimental spacecraft of his own design as the government threatened to withdraw funding. Although their launch was successful, the ship's shielding was inadequate to protect the team from a sudden burst of cosmic radiation caused by a solar flare as they tried to enter hyperspace. This radiation mutated Richards, allowing him to stretch and elongate his body at will into nearly any shape he could imagine, with his friends suffering mutations of their own. Convinced that he ought to use his newfound powers for the good of humanity, he created the Fantastic Four, one of the world's first superhero teams.

He would later marry Susan and had two children, Franklin Richards and Valeria Richards.

Attack Potency: Building level (Can fight against those that can harm him, damaged Grey Gargoyle and pulverized a car), up to Multiverse level+ with preparation time (Created a weapon which nullifies Cosmic Cubes. Built an Anti-Galactus Mech. Created a weapon that can kill Celestials. Has his own Ultimate Nullifier)

Stamina: Extremely High (Despite being stretched to his maximum length and his skin frozen, he endured the pain of his entirety nearly tearing apart and broke free)

Standard Equipment: His uniform (made of unstable molecules that stretches along with him, has an on-board computer with translator, remote controls for FF equipment and a digital interface, the suit also makes them resistant to some transmutation powers), in possession of the Power Gem but would never use it

Intelligence: Supergenius. He has created machines and devices far beyond anything else on earth, including time machines, FTL spaceships, dimensional portals, robots with power above the level of Galactus' heralds, planetbusting weapons, multiversal computers, reality warping devices, teleportation devices, discovered scientific principles far in advance of the rest of the world and even advanced alien races, devices that can harm cosmic beings, successfully convinced alien races to spare the life of Galactus when he was dying, fluent in multiple languages including alien languages, has a Ph.D. in practically every field imaginable (some of which he invented), master of psychology, often considered to be the smartest person on the Marvel Earth, with the possible exception of the High Evolutionary.

Weaknesses: Will undergo pain and injury if his body is stretched more than 3 miles, vulnerable to extreme heat and cold, sometimes has trouble understanding magic, vulnerable to energy blasts and weapons

The Ultimate Nullifier constructed by Mister Fantastic is likely not remotely comparable to the scale of the real Nullifier. As such, please refrain from scaling this profile to it.