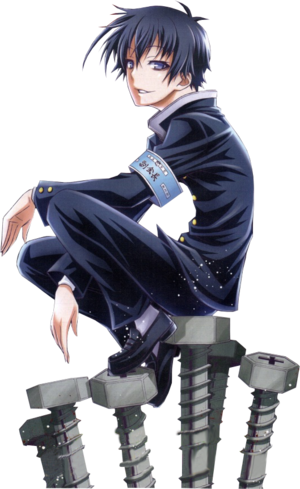 Misogi Kumagawa (球磨川 禊, Kumagawa Misogi) is a senior of Class -13 and its first student. An executive member of Class -13, he is the center of the new Flask Plan, as well as the leader of the new Student Council created to oppose Medaka Kurokami. Kumagawa is the chief antagonist of the Kumagawa Incident Arc. After being defeated and reformed by Medaka, he joins her Student Council as its vice-president. He is also the protagonist of the Good Loser Kumagawa spin-off series, which takes place prior to the start of the series.

Tier: Unknown, at least 8-B physically. Unknown with All Fiction

Powers and Abilities: Superhuman Physical Characteristics, Causality Manipulation (Can erase causes and effects with All Fiction, removed the effects of Zenkichi's kicks and erased all damage received. This also allows him to warp space, induce Absolute Zero by erasing temperature from something, erase people, time, concepts, laws, memories and even his own injuries making him capable of resurrecting himself), Subjective Reality, Immortality (Type 2 and 4 with All Fiction), Power Nullification and Statistics Reduction (Can bring an opponent down to his level in intellect, technique, body, and spirit with Book Maker), likely Sealing, Durability Negation, Non-Physical Interaction (Bookmaker is capable of by-passing defensive abilities and traits including non-corporeality), Limited Empathic Manipulation (Crushed the hearts of almost an entire assembly of high class candidates with only a few words, while he was intentionally holding back to filter out the most qualified among them. Medaka was in disbelief that any of the crowd members were still standing after experiencing his Minus mentality), Resistance to Power Erasure, Sealing, Telepathy and other mental abilities

Attack Potency: Unknown, at least City Block level physically (Defeated the Plus 6 and members of Class 13 on his own, one of which had enough durability to tank a small explosion and another capable of taking Kurokami Medaka's best attack. Comparable to Shiranui Hansode). Unknown with All Fiction (It was stated that his lack of full control over his powers could wind up with him erasing all of existence. Also, combining it with Book Maker Managed to seal Najimi, but according to Kumagawa, he was only as successful as he was because she herself wanted to be held; he sealed an exact copy of Ajimu with little difficulty so it is unclear to what extent his success relied on her consent), can bypass conventional durability with All Fiction as well as spawning his screws directly inside people

Speed: At least Speed of Light (Comparable to Pre-End God Mode Medaka), He can also make his time zero so that his movements become virtually instantaneous, granting him Pseudo-Teleportation and Pseudo-Time Stop

Durability: Unknown, at least City Block level (Capable of tanking hits from Shiranui Hansode), Immortality and Regeneration apparently enables him to instantly recover from any damage and destruction

Stamina: Nigh-unlimited, due to his ability he can simply negate any fatigue he experiences

Range: Several meters with screws. Universal with All Fiction, possibly limited to his line of sight.

Standard Equipment: A bunch of very large and small screws

Intelligence: As "the weakest person in the whole world," Kumagawa knows every weakness of the human body and is able to exploit them in combat, instantly incapacitating multiple opponents by plunging his screws into their weak spots in an instant. Although he is a failure academically, he is also a master manipulator and a sociopath who toyed with the emotions of much of the cast for his own amusement, is one of the last people Medaka was able to reform, but he never truly strayed from his destructive ways. He could almost instantly detect Takarabe's feelings of hatred despite her ultimately shallow but cheerful persona

Weaknesses: Kumagawa is very underconfident, to the degree that he always assumes that he will lose. Even though he wants to win, he cannot imagine that he ever will. Because of this, his Imagination Manifestation is incredibly weak. A continuous cycle of death can incapacitate him

Imagination Manifestation: Kumagawa has demonstrated the ability to manifest immaterial objects into reality with a sheer force of will, allowing him to create an ethereal blade that slays magical beasts with ease. It is also theorized that he imposes the image of a screw piercing a target in order to allow Book Maker to activate.

Presence Erasure: Kumagawa is able to erase his "aura" with All Fiction, making it impossible for his foes to sense his presence outside of the five senses.

All Fiction: His Minus ability allows him to deny any aspect of reality. So far he has used his ability to heal any wound done to him despite how grave they are (Crushed his own brain with a giant screw and he could still regenerate), resisted having his body rotted away, brought himself back from death, and stole Zenkichi's sight. He can also heal the wounds of other people, and seemingly also materials that have been destroyed. He has stated that he doesn't have to touch anyone or use his hands to use his All Fiction, but he does so anyway. One drawback was that he cannot undo something he's already rejected, as shown when he stole Zenkichi's sight and stated that he could not undo what he did, but by the end of the series Ajimu grants him Non-Fiction, which undoes the erasure. He also seems to be able to find people who are far away by some unknown method. During his time at Suisou Academy he is shown to be able to even use All Fiction to erase the concept of colors, manipulate laws by erasing them, manipulate time making it so that his time limit doesn't arrive among possibly other uses and even erase the temperature of something dropping them to absolute 0. Furthermore during that time he explained that to erase something, said "thing" has to be in his line of sight, however it is unknown as to what counts as "line of sight" due to his capability of erasing abstract things like concepts and laws. It is unknown if All Fiction has this condition due to him being capable of erasing injuries that are not in his line of sight.

Book Maker: Kumagawa's original Minus, requiring him to impale his foe with a large screw. Though the damage to the body is nearly zero, it can turn the enemy into a Minus, reducing their intellect, body, spirit, talent, and technique to fall to Kumagawa's pathetic level. However, since they're brought down to Kumagawa's level, any battle between him and his foe will simply be a draw unless outside intervention is involved.

Galand (Nanatsu no Taizai) Galand's Profile (Speed Unqualized, Both were at their peak)

Ganondorf (The Legend of Zelda) Ganondorf's Profile (Both were at their strongest, and speed was equalized)

Itachi Uchiha (Naruto) Itachi's Profile (Base Itachi was used, and speed was equalized)

Kurumi Tokisaki (Date A Live) Kurumi's Profile (Speed was equalized, the distance was 100 meters, and both were in their respective peaks)