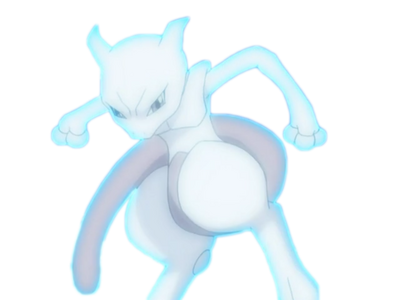 Mirage Mewtwo is a Mirage Pokémon created by the evil Dr. Yung. It has the types, powers, and abilities of all Pokémon that existed at the time.

Attack Potency: Planet level (Contains the combined informations of all 386 Pokémon prior Sinnoh, including the original Mewtwo and Deoxys). Can ignore durability in a number of ways.

Stamina: Likely limitless due to not being made of matter.

Intelligence: Genius intelligence. Has the experience of all the legendaries that make it up, most of which have thousands of years of it.

Weaknesses: Rock moves (A Pokémon with every type would only have a weakness to rock), though this can be changed, Mirage Mew, Can only exist within the Mirage System.