Miraak is the main antagonist of the third expansion for The Elder Scrolls V: Skyrim, Dragonborn. He is the first entity to take up the mantle of 'Dovahkiin', however before he would he would use his ability to slay his own kind, he was loyal to the Dragons, serving as the Dragon Lord that was responsible for ruling over the area of Solsteim.

He would be corrupted by the Daedric Lord Hermaeus Mora when he sought the demon's teachings, learning of a way to bend the will of Dragons to his own, and turned on his lords, killing a great number of them and gaining a greater and greater influence. His temple would be razed by the Dragons in return, however, only being saved by the will of his lord. However, this would trap him in Oblivion for millennia, where he would amass great knowledge and plot his return to Nirn.

Powers and Abilities: Superhuman Physical Characteristics, Weapon Mastery, Immortality (Type 1), Blessed, Reality Warping with the Thu'um and with Magic (Magic brings changes into reality by accordance of the will of the user. The Thu'um allows one to add their voice to the underlying song of creation and alter it), Soul Absorption (Absorbs the souls of Dragons and presumably other Dragonborn after killing them, preventing them from resurrecting at a later time, and can use them to unlock words of power), Magic Absorption (His robes allow him to absorb a portion of spells used against him into his own Magicka), Statistics Amplification, Intangibility, Summoning of Dragons and Daedra, Regeneration (Mid-Low), Mind Manipulation (Can cause animals, humans, and even Dragons to become his servants with a single shout. From within Apocrypha, he was able to cause hundreds of individuals to enter a trance and construct monuments of himself), Fire Manipulation, Ice Manipulation, Air Manipulation, Electricity Manipulation, Forcefield Creation, Healing, Teleportation/BFR, Telekinesis, Stamina Draining, Can generate tentacles that deal Poison Damage, Resistance to Magic, Paralysis Inducement, Frost Attacks, Telekinesis, Reality Warping (Unaffected by the Wabbajack), Death Manipulation (Unaffected by Mehrune's Razor), Poison Manipulation (Undamaged by the poisonous waters of Apocrypha), Mind Manipulation (Unaffected by Bend Will and a number of Illusion spells), Madness Manipulation (Kept his sanity for millennia within Apocrypha, which is known to drive those who enter it insane within days)

Attack Potency: Universe level+ (Treated the defeat of Alduin as trivial and a feat he could have accomplished himself, and casually stomped a late-game Dragonborn on their first encounter. He is considered a major threat to Nirn as a whole. Able to defeat numerous dragons, many of high-ranking, and absorb their souls. Should be comparable to other Dragon Priests such as Ahzidal, who can wield Dawn Magicks)

Speed: Immeasurable (Can fight with the Last Dragonborn and purportedly slay Alduin, who exists unbound by linear time and is superior to Jills who are responsible for mending-minutes and repairing Dragonbreaks)

Durability: Universe level+ (Can take numerous hits from The Last Dragonborn, who was able to kill Alduin in Sovengarde. Claimed that he could have defeated Alduin in battle, and exchanged attacks with a Dragon Priest of similar standing, Valok)

Stamina: Likely physically tireless, as he was active in Apocrypha without food, water, or rest. Lasts decently long in his battle against the Last Dragonborn, which is assisted with his ability to restore health/stamina from absorbing souls of dragons he summons, as well as his sword's ability to drain stamina from foes he attacks

Range: Standard Melee Range with his Sword, Extended Melee Range with his Staff, Planetary with the Thu'um (The Greybeards, who are far less powerful than him with their Thu'um, could shake the entire planet), Low Complex Multiversal with magic (He was able to influence Nirn from the higher-dimensional space of Oblivion, brainwashing the inhabitants of Solsteim and stealing the souls of dragons the Dovahkiin killed. He could also summon the Last Dragonborn to Oblivion and send him back to Nirn)

Intelligence: Extraordinary Genius. He has spent the past few millennia reading through the near-infinite knowledge stored within Apocrypha, enough to the point where he was able to accurately predict the arrival of the Last Dragonborn, and how to interact with Nirn from Oblivion and gain enough influence to enter back into it. This amount of knowledge is enough to cause high-ranking mages to go insane within days 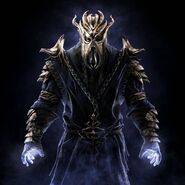 Miraak as seen in Skyrim
Add a photo to this gallery