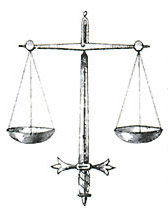 The Ministry of Right and Wrong is the organization that manages the entire system regarding Souls and the afterlife in the Touhou Project series. Created in response to humanity's growing numbers, it is mainly composed of the many judges who deal with the deceased and of the leaders of Heaven, the Netherworld and the many hells.

Civilization Type: Planetary Civilization to Multiversal Civilization (The Ministry of Right and Wrong possesses dominion over all forms of afterlife within the Touhou Project series. This includes Gensokyo's hell, which is larger than planets such as Jupiter and the Dream World's hell, which should be comparable in size to the Dream World. Overall, the organization controls several separate space-time continuums which range in size from planetary to far larger than the main universe and includes Higan, which can grow infinite in size due to the Sanzu River)

Name: Ministry of Right and Wrong

Classification: Organization that rules the Afterlife

Population: Unknown (Hell possess everyone who has ever fallen into Hell in the past, although high ranking members are comparatively scarce)

Territory: Covers all forms of afterlife, including the universe-sized Paradise and the Infinite Higan.

Technology/Abilities: Space-Time Manipulation (They can create whole Brane Worlds and expand already-existing ones), Can create copies of beings, Can manage the souls of the entire universe, Can control the distances between two places or object, Capable of directly attacking the mind of enemies

Military Prowess: Unknown (Each Hell has 10 Yamas, who each command multiple Kishins and lesser judges)

Retrieved from "https://vsbattles.fandom.com/wiki/Ministry_of_Right_and_Wrong?oldid=5189550"
Community content is available under CC-BY-SA unless otherwise noted.