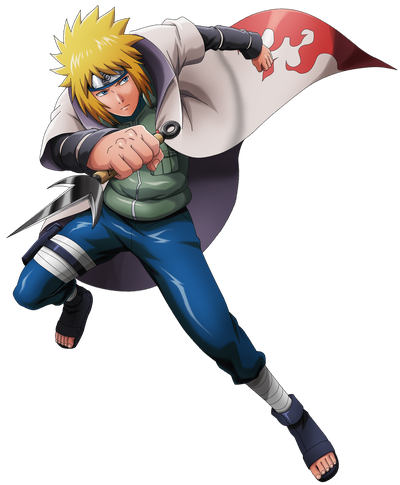 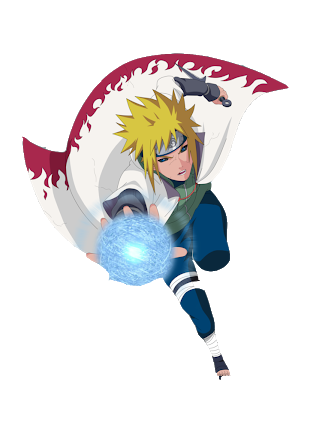 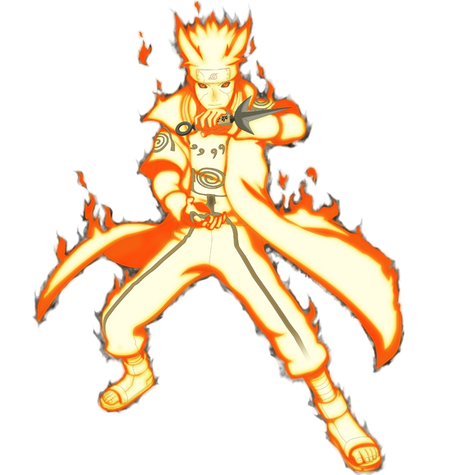 Minato Namikaze (波風ミナト, Namikaze Minato) was the Fourth Hokage (四代目火影, Yondaime Hokage; Literally meaning "Fourth Fire Shadow") of Konohagakure. He was famous in life for his speed, leading to the moniker of Konoha's Yellow Flash (木ノ葉の黄色い閃光, Konoha no Kiiroi Senkō; "Yellow Flash of the Leaf"). He died during the Nine-Tails' attack on Konoha, sacrificing his life to seal a part of the Nine-Tails into his newborn son, Naruto Uzumaki.

Age: 24 at the moment of his death

Superhuman Physical Characteristics, Genius Intelligence, Chakra Manipulation, Skilled Hand-to-Hand Combatant, Acrobatics, Stealth Mastery, Multiple Personalities (Possesses half of Kurama's chakra), Fire Manipulation, Air Manipulation, Electricity Manipulation, Teleportation, Explosion Manipulation with explosive tags, Speed Enhancement with Shunshin, Shapeshifting (Can transform into animate and inanimate objects), Weapon Mastery (Skilled user of kunai and shuriken), Summoning (Able to summon various toads), Statistics Amplification (Can enhance his physical capabilities with chakra), Extrasensory Perception (Can detect chakra signatures from great distances, and can further amplify his sensory capabilities with senjutsu), Duplication (Can create and use shadow clones who can use his techniques, relay their knowledge and experiences to him, among other things), Portal Creation (Can create a Space-Time Barrier which can warp away anything it comes in contact with to a marked position), Sealing and Soul Removal (With the Dead Demon Consuming Seal), can replace himself with inanimate objects to avoid damage, Surface Scaling, likely Paralysis Inducement (via paralysis technique), Forcefield Creation (can create a barrier with the other four Hokage), Non-Physical Interaction (via barriers and sealing)

All previous abilities, Enhanced Senses, Absorption (Can absorb natural energy from his surroundings), Limited Petrification and Transmutation (Absorbing excess natural energy directly from him without the ability to properly balance it results in the target being turned to stone and into a frog)

All previous abilities in base and edo tensei, Body Control (With Kurama's chakra he can create chakra arms to attack targets from a distance and grant him better mobility and maneuverability), Corrosion Inducement and Vibration Manipulation with Kurama's chakra, Can attack targets that enter his mind, his chakra can act as a forcefield around him, Energy Projection, Limited Regeneration Negation (Up to Low-Godly) and Plant Manipulation (Scaling from Naruto), Resistance to Soul Manipulation and Power Nullification (Scaling from Naruto)

All previous abilities in base enhanced, Large Size with Bijuu Mode (Varies from Type 2 to Type 3, as the size of the Bijuu was portrayed inconsistently), Power Bestowal and Advanced Energy Manipulation (Scaling from Naruto)

Stamina: Very high (He has a considerable chakra in the base, higher with Kurama's chakra), nigh unlimited as Edo Minato

Range: Standard melee range, far higher with jutsus and teleportation. | Same | Over a kilometer with chakra blasts, at least tens of kilometers with Bijuudama.

Intelligence: Genius (Held in very high regard for his combat prowess and skill. He created the Rasengan jutsu. Exceptionally talented and efficient in using his space-time jutsu. He was also able to figure out how kamui worked in little time.)

Weaknesses: He hasn't fully mastered the sage arts, as it takes too long for him to build up natural chakra, and he has a severely limited amount of time with it.

Minato Blazing - Narucole
Add a photo to this gallery