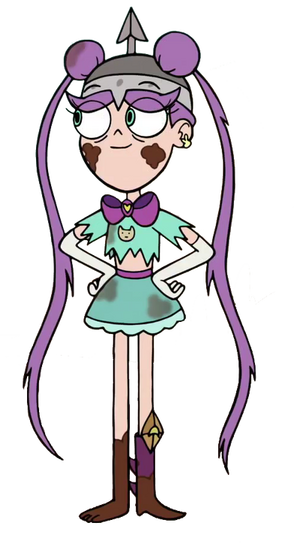 Mina Loveberry is a character in the Disney cartoon Star vs The Forces Of Evil. She was a famous Mewman warrior famed for her unparalleled strength throughout the universe. After learning that Earth didn't have a single ruler, she attempted to conquer it. As Star Butterfly is a parody of the "Magical Girl" genre in general, she herself is a parody of Sailor Moon.

Age: Unknown, at least over 300 years (While her exact age is unknown, she is older than Eclipsa, having been a warrior during Solaria's rule)

Attack Potency: At least City Block level (Stated to be the greatest warrior to ever live, so she should be stronger than, or at least on par with King Butterfly who leveled a good chunk of a forest just by landing), likely far higher | At least City Block level, likely far higher (In her Magically Enhanced form, she easily overpowered Star and Tom and was undamaged by their magic, her magic is what powers her armor. Stated that all the Solarian Warrios were enchanted with Queen Solaria's magic) At least Universe level+ with Solarian Armor (Superior to soldiers created by Moon, a single one of them while armored with a Solarian Armor being capable exchanging blows with and hurting Globgor, as well overpowering Eclipsa's spells)

Speed: Likely Subsonic (Should be as fast as King Butterfly, who ran 10 miles in 5 minutes, which is roughly 53 m/s) | Likely Sub-Relativistic

Intelligence: Mina Loveberry is completely insane. She was first seen dumpster diving for donuts on Earth and she greatly enjoys rubbing mud over her face. Her insanity went as far as causing her to believe that she should conquer Earth because they had no ruler and "lost" when the people voted against her conquering Earth.

Key: Base | When Magically Enhanced

Retrieved from "https://vsbattles.fandom.com/wiki/Mina_Loveberry?oldid=6079531"
Community content is available under CC-BY-SA unless otherwise noted.