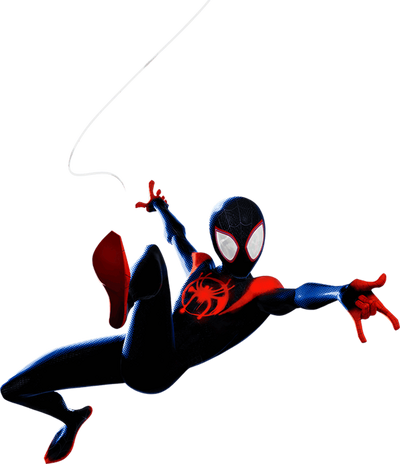 Miles Morales was a normal teen who admired Spider-Man and reluctantly moved into a charter school in Brooklyn, New York City after winning a contest. When following his uncle, Aaron, to practice graffiti in a subway station, Miles is bitten by a genetically edited spider. Later realizing it gave him powers, Miles returns to the station and witnesses Spider-Man's demise while battling the Kingpin's forces to stop him from activating an unstable particle accelerator.

When he stumbles upon the Peter Parker of another universe, summoned to his own by the machine, Miles and Peter form a team with other Spider-Men (and Spider-Women) of alternate universes, also brought there by the accelerator, to stop Kingpin's device from unmaking reality and return the heroes to their home realms.

Tier: 9-A, higher with Venom Blast

Attack Potency: Small Building level (Destroyed several walls during his fight with Prowler. Unintentionally broke off part of a boulder on accident. Fought with Kingpin, who threw a car over his head, cracked part of a concrete bridge and killed a weakened Spider-Man, who had just fought a building-sized Green Goblin and survived an explosion that destroyed a subway station), higher with Venom Blast (Inadvertently knocked Spider-Man out when first activated, and later destroyed some of his webbing, which he could not physically break out of)

Speed: Supersonic (Comparable to Gwen, who outpaced a bullet to save her father)

Weaknesses: Relatively inexperienced, initially could not activate invisibility or venom blast at will.

Booster Gold (DC Comics) Booster's Profile (Both were in character and started 1.5 meters apart in an open field. Win condition was by death. Speed was equalized)

Start a Discussion Discussions about Miles Morales (Into the Spider-Verse)