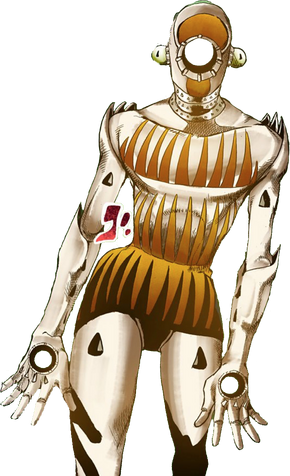 Milagro Man is an automatic Stand which appears in Jojo's Bizarre Adventure Part VIII: Jojolion. According to its current host, Zaihei Nigatake, it originally came into existence when an arms dealer lost millions in a lawsuit, went mad, murdered his entire family and set his mansion on fire, with a scorched currency note being the only thing left intact. The curse due to this heinous act caused the appearance and perpetuation of the Stand.

Age: Unknown (The arms dealer appears to be dressed in 90s clothing)

Powers and Abilities: Non-Corporeal, Intangibility, Invisibility, Non-Physical Interaction, Curse Manipulation, Summoning and Creation of money, Transformation (Can convert the notes from one legal tender to another), Teleportation (Can teleport accumulated money directly to its user), Possession (Can possess any random person and make him/her its user as long as the conditions are fulfilled)

Lifting Strength: Unknown (Is not a physical-focused Stand)

Striking Strength: Unknown (Is not a physical-focused Stand)

Stamina: Unknown, likely Infinite (Due to being an automatic Stand)

Range: Extended Melee Range (Its effects have been seen up to this extent)

Intelligence: Mindless (As an automatic Stand, it can only carry out its function)

Weaknesses: The curse and the Stand can be easily passed to other people in theory, but is hard to do in practice. The Stand has no other means of attacking other than summoning currency notes. As a natural consequence of Milagro Man being an Open Secret, it can be easy to gain intel on the nature of the ability