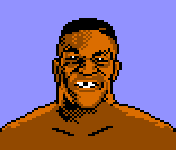 Mike Tyson made his video game debut in Mike Tyson's Punch-Out!! on the Nintendo Entertainment System as the final opponent of the game, whom Little Mac faces in the Dream Fight at the end. His uppercuts knock Little Mac down in one hit. Mike Tyson mostly does uppercuts however he will begin doing a larger assortment of punches after 90 seconds of the fight.

Attack Potency: Street level (Able to knock Little Mac down in one hit.)

Weaknesses: He is in a major disadvantage if his opponent does not fear him, he starts strong but if the opponent continues to endure him long enough, his blows become weaker and weaker.

Start a Discussion Discussions about Mike Tyson (Punch Out!!)