Mika is a playable character in Under Night In_Birth Exe:Late[st]. While her past before being taken in by the Licht Kreis is unknown, she becomes a member of Orie's team. She's a very spunky and cheerful young girl who greatly looks up to her friends and superiors.

Her greatest trait is her undying loyalty towards Orie. When Mika hears that her friend might need help, she escapes from headquarters using a spoon, steals a plane and crashes it, lives off the land on a remote island, builds a raft and heads towards Japan, and almost gets captured by the Coastal Guard, but forces her way through.

Intelligence: While she's in high school and has been trained by the Licht Kreis in combat, she has the mentality of a hyperactive child and is often teased for her low intelligence. She's poor at drawing, speaks in the third person, is extremely gullible, and bursts out into a rap while arguing against her mentor in the organization. 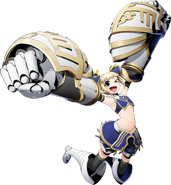