VS Battles Wiki
Register
Don't have an account?
Sign In
Advertisement
in: Characters, Toriko, Anime Characters,
and 26 more 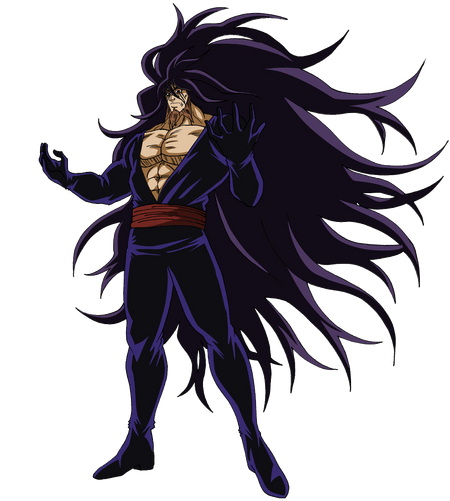 Midora (三虎 (ミドラ)) is the leader of the Gourmet Corp. and the main antagonist of  Toriko's Human World Act. He is simply referred to as "Boss" by many of the organization's members. Midora, in the past was trained by the legendary God "Acacia as his third disciple, having been preceded by the IGO president  Ichiryu and the famed "Knocking Master" Jiro. All three disciples were also the adopted children of both Acacia and "Chef Goddess" Froese. With the death of his older brother Ichiryu, he is currently the strongest man in the world.

Midora's birth and childhood were filled with much grief and hardships, but upon being taken in by his adoptive family he had found true peace, however that all came to an end after the traumatic loss of his mother which greatly altered his views and made him believe that the world did not deserve Froese's charity and kindness. Thus he founded the Gourmet Corp. and currently directs it towards finding Acacia's main dish, GOD in the Gourmet World in hopes of using it to take control of the world's food supply and deprive the world he regarded as cruel and selfish from the blessings of food given to them by Acacia and Froese, believing they do not deserve what they have taken for granted.

After the events of the Cooking Festival Arc, Toriko meets Midora, in which they form an agreement of mutual interest. Since then, Midora has become a core ally of Toriko and company, even going as far as sending the strongest members of his organization to help the Four Heavenly Kings capture Acacia's full course and defeat NEO.

Classification: Leader of the Bishokukai, Former Disciple of Acacia

Powers and Abilities: Superhuman Physical Characteristics, Regeneration (High-Mid; survived his body being rotted and cut into pieces and instantly regenerated from it), Immortality (Types 1 and 3), Reactive Evolution, Longevity, Transformation, Energy Manipulation (With Meteor Spice/Burst), Void Manipulation with Hungry Tongue and Hungry Space (His tongue devours everything down to the last atoms in its trajectory, which creates invisible rifts of void; Hungry Space completely disintegrated the dragons pulled down by Emperor Vortex; see Note for details), Matter Manipulation and Biological Manipulation with Minority World (Alters the nature of atoms by reversing the majority to minority where atoms behave erratically and defy physics; can cause bodily dysfunctions like asphyxiation, blood flow reversal etc. leading to death; His Minority World completely atomized Joa. Used Minority World to slow Acacia down), Limited Flight, Durability Negation with Hungry Tongue/Space and Minority World, Attack Reflection with Minority World (Reflected Acacia's Gourmet Punch right back to him), Reactive Evolution with Mirror Neuron (Midora gains resistance to various types of abilities during combat), Status Effect Inducement (Can use Knocking to paralyze the enemy.), Invisibility via Mirror Neuron (he was able to blend in perfect darkness and strike Ichiryuu from behind), Supernatural Luck via Food Luck (Joa's Satan Hole missed even after it had already touched Midora's forehead, and deflected Gourmet Spank which is much larger than Earth in surface area. Midora stated that Toriko coming to his rescue was due to his Food Luck), Life Creation and Power Mimicry via Mirror Neurons (Was able to mimic Ichiryuu's Minority World throughout their fight, and Joa's Food Luck after escaping The Can), Healing and Self-Sustenance (Type 1, Ate AIR that allows him to heal himself incredibly fast and spend a few days in a place where there is no oxygen), Non-Physical Interaction (Drank PAIR that allows him to interact with Food Spirts and see Back Channels), Extrasensory Perception (Drank ATOM that allows him to see invisible Gourmet Matter), Resistance to Sealing (Escaped Joa's tuna can after being sealed), Atomic Manipulation (While fighting Ichiryuu, Midora gained resistance to Ichiryuu's Minority World), Paralysis Inducement (Was unaffected by Mohyan's motion control ability), Time Manipulation (Resisted Joa's Warp Kitchen where time moves slowly)

Attack Potency: Large Star level (Toriko said that Midora could destroy the Toriko world if he felt like it, Joa said that all of Acacia's disciples have the power to destroy the Toriko World, which has GBE higher than supernova explosions), can ignore conventional durability with Minority World, Hungry Tongue and Hungry Space | At least Large Star level, possibly higher (Fought on par with Acacia after the latter had eaten Neo, who devoured countless stars; Midora was able to do this with incredible ease)

Speed: Massively FTL (Ichiryuu was unable to react to his Hungry Tongue) | At least Massively FTL (Blitzed and killed Joa eight times in 0.01 seconds. Is able to keep up with Acacia after he consumed Neo)

Lifting Strength: At least Class T via powerscaling (Should be as physically strong as Toriko)

Striking Strength: Large Star Class (Was able to inflict a fatal injury on himself with his bare hand, while his body was haywire) | At least Large Star Class, possibly higher (Capable of punching away Acacia away with great force, even some causing a big explosion)

Durability: Large Star level (Withstood Ichiryuu's strongest attack without serious injuries) | At least Large Star level (After escaping The Can, none of Joa's attacks could do the slightest bit of damage to him. Also withstood many hits from current Acacia), possibly higher

Stamina: Extremely high, comparable to Ichiryuu, virtually unaffected by having his arms cut into chunks, being sliced in half, and having parts of his head blown, and even having his body begin to melt

Range: Planetary with his tongue, Meteor Spice and Meteor Laser

Intelligence: As the boss of the Bishokukai and a Disciple of Acacia, Midora is one of the most powerful combatants in the Toriko world. He is also considered one of the people most likely to obtain "GOD" and was able to figure out how to offset the organ failure caused by Ichiryuu's Minority World while under its effects, showing an incredible aptitude for critical thinking as his own brain cells and nerves were under duress form the technique. He also has shown the skill and use of using knocking, having applied a technique on Starjun that is able to stop him from before his death

Weaknesses: Somewhat arrogant and rarely fights full-on from the start

Gourmet Cells: Specialized cells with excellent regenerative and strength-enhancing qualities. When a human successfully adapts Gourmet Cells into their body they gain overwhelming life force and strength, creating a super human. An individual's Gourmet Cells increase in power when they consume delicious foods that suit them and the 'tastes' of their gourmet cells, causing the cells to 'evolve'; this enhances the strength of the user and their abilities. Gourmet cells can also evolve as a response to harsh new environments, instantly creating adaptations which allow the user to survive. Gourmet Cells have very high energy demands, so individuals must consume frequent large amounts of delicious food, lest the cells begin uncontrollably devouring their body at the cellular level.

Hungry Tongue: Midora can control the length, size, direction and form of his tongue, which he uses as a whip to consume his target as well as a weapon to assault his opponent(s). It's potent enough to consume atoms around the 'space' it touches, even air, creating invisible rifts of void.

Appetite Energy: The cellular energy of the Gourmet Cells, which represent the "hunger" of the cells. Through training and mastery together with immense appetite, it can be brought outside the body in various shapes and forms.

Hungry Blow: A punch powerful enough to cause an explosion when the target hits the ground.

Mirror Neurons: Midora is capable of understanding the mechanics behind someone's techniques to learn, counter, or exploit them. His form of imitation is by far the most complex as he can imitate not only the very nature of an opponent's ability but also the very nature around him, allowing him to blend into the environment as if he were a part of it. This ability has allowed him to see through and copy the mechanics of Ichiryuu's Minority World and Joa's Food Luck.

Minority World: Midora is later revealed to be able to use Ichiryuu's signature ability, allowing him to control atoms that defy the natural laws governing matter and impose it on his environment. Upon activation, he very nearly killed Joa, who was only saved from total annihilation by Froese's Gourmet Luck. The usage of Minority World can also elevate Midora's regeneration-speed to become instantaneous and allows him to instantly destroy pathogens (such as Joa's microbes) within his body.

Food Luck: Belief of the fortune one can have with ingredients and their daily lives, such as the chances of finding rare ingredients, surviving against nature, or the luck one can have succeeding at a food-related event.

Note: Midora's Void Manipulation isn't actual Existence Erasure, rather it's a space void of air (aka vacuum) which disintegrates anything that enters its range on an atomic level.