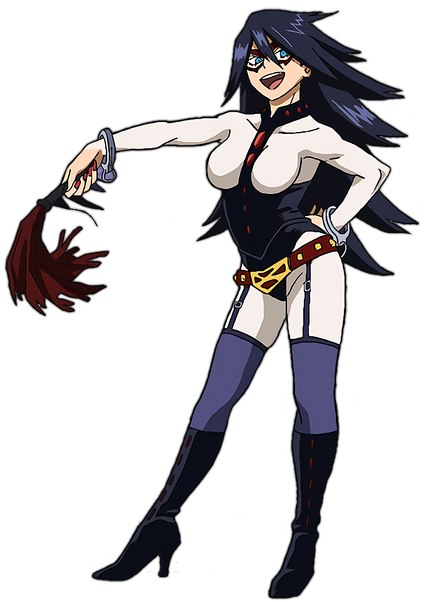 Nemuri Kayama (香山睡 Kayama Nemuri, also known as the 18+ Only Hero: Midnight, is a Pro Hero and faculty member at U.A. High School. She teaches Modern Hero Art History and was the Chief Referee of the U.A. Sports Festival for first year students as well.

Midnight is a very playful and flirtatious person with an occasional serious and angry side to her. She gets angry whenever someone interrupts her or when they poke fun at her age. She displays no shame in dressing or acting sexily in front of young students and appears to act on whims quite often.

Attack Potency: Building level (As a Pro Hero, she should be superior to most heroes in training). Ignores conventional durability with Somnambulist

Speed: Supersonic+ reactions and combat speed, Supersonic attack speed with her whip (Whip loops can break the sound barrier, with whip tips being twice as fast)

Durability: Building level (Was near the center of the explosion caused by Deku and Todoroki's clash during the sports festival and was relatively unfazed. Should be superior to even a trained Tokoyami)

Intelligence: Likely Above Average as she is a Pro Hero and teacher at U.A. High School. As such she is also very proficient with her Quirk-- knowing when to use it to break up a fight or knock opponents out quickly.

Weaknesses: Her sadistic side can get the better of her and allow opponents to take advantage of it. Her Quirk has a limited range, works better on males than females, and requires her to expose skin to use.

Somnambulist: Midnight's Quirk gives her the ability to put targets to sleep by emitting a sleep-inducing aroma from her body.

Start a Discussion Discussions about Midnight (My Hero Academia)