VS Battles Wiki
Register
Don't have an account?
Sign In
Advertisement
in: Characters, The Legend of Zelda, Tragic Characters,
and 17 more 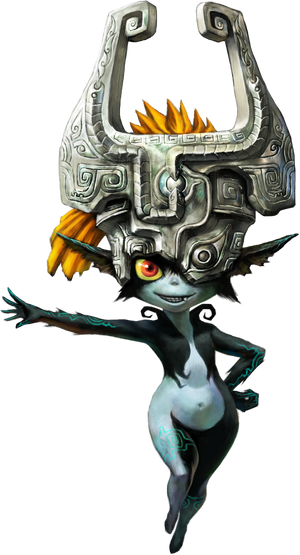 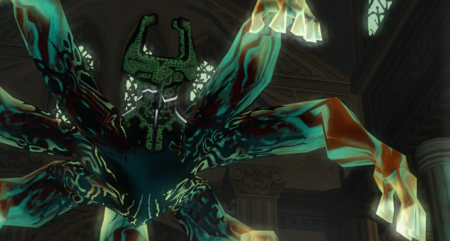 Midna is one the protagonists of The Legend of Zelda: Twilight Princess.

She is the leader and princess of the Twili, a race descended from the wielders of powerful and evil magic that were banished to an alternate dimension by the goddesses Din, Farore, and Nayru after the Interloper War.

Prior to the main events of the game, Zant overthrew her by turning her into an imp devoid of her previous magical powers, but to her being in possession of a Fused Shadow she was able to leave the Twilight Realm. Later on, she found a wolf being locked in a prison cell and decided to free and aid him due to her being aware of the the Twili legend that depicted the Hero as a divine beast.

Powers and Abilities: Superhuman Physical Characteristics, Portal Creation, Teleportation of herself and others, Can become shadows and attack with darkness, Phasing, Shapeshifting, Energy Manipulation, Can use her hair as an extra hand, Regeneration (High-Mid. She disintegrates and reintegrates herself at will)

Speed: Massively Hypersonic+ with Relativistic combat speed and reactions (Kept up with Link and Ganondorf)

Standard Equipment: Her hair, the Fused Shadow, a summoned trident.

Intelligence: Gifted (She was able to manipulate Link, came up with a few schemes to try to defeat Zant, gives Link hints throughout his adventure)