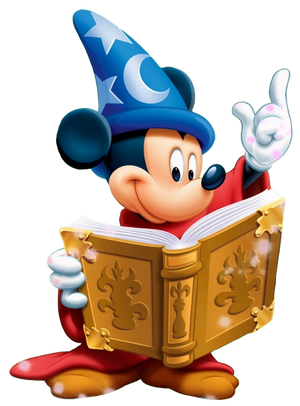 In the all-time classic Fantasia, Mickey is the apprentice of a powerful sorcerer known as Yen Sid. Whilst the sorcerer spends his time conjuring spells and working with his abilities, Mickey merely works more as a servant, carrying buckets up a massive staircase to a well full of water. One night, however, after Yen Sid retires to slumber, Mickey sneaks on the sorcerer's hat, which appears to be the main source of his magic. Having enough of the physical labor, Mickey brings a broomstick to life with his new found magic and orders it to carry on his duties. It's a success, and the little mouse soon falls asleep, dreaming he is the world's greatest sorcerer. At first, he does not realize the broom continues to bring water to the well. So much, that the tower becomes flooded. Mickey tries to stop the broom, but it's no use, and the mouse is forced to kill it by cutting it to pieces with an ax. After the deed is done, Mickey begins to rest again, but the tiny pieces of sliced wood magically become hundreds of living brooms, and the army continues on with the duty of filling the overflown well with water, soon flooding the entire tower until Yen Sid arrives and puts an end to the chaos. After all seems well, Mickey silently apologizes and is ordered to return to his duties as punishment.

Lifting Strength: Athletic Human (Held back many broomsticks forcing their way in through the door, for a while)

Durability: Athlete level (Unharmed by being trampled under multiple brooms)

Stamina: High (Was able to do straining work for extended periods of time before tiring out. Nearly drowned and was stomped on by a herd, yet remained active)

Intelligence: At least Above Average (Knew the spell to bestow life upon the brooms by studying his master, albeit he didn't know how to undo said spell, and didn't have the foresight to realize its consequences)

Retrieved from "https://vsbattles.fandom.com/wiki/Mickey_Mouse_(Fantasia)?oldid=5861076"
Community content is available under CC-BY-SA unless otherwise noted.