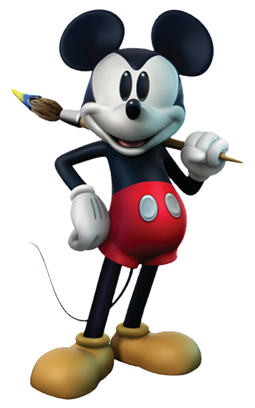 Powers and Abilities: Superhuman Physical Characteristics, Reality Warping via Toon Force (Can slow down time and drop anvils, and can do the same things as his canon version), and Magic, Immortality (Types 2 and 8; Lost his heart and doesn't need it to live which somewhat functions as a soul, Remains alive and unforgotten as long as people love and remember him), Acid Manipulation, and Creation (Can delete and create living beings with his paintbrush), Morality Manipulation (Can make people friendly to him with Paint), Gravity Manipulation (via Fairy Sketch), Elasticity (Can extend/stretch his tail to use as a rope or lasso ), Resistance to Acid/Morality Manipulation (Uneffected by Thinner and Paint)

Attack Potency: At least Wall level physically (Can destroy walls), Varies, likely at least Large Building level+ via Reality Warping/Toon Force (He has the same feats as the canon version of Mickey Mouse, the canon version of Mickey at his best destroyed the 4th wall and even modified the chronology of events altering gravity and time), can bypass durability by launching dip (The dip can kill any kind of cartoon)

Speed: Subsonic (Dodged cannonfire, and is comparable to Oswald, who also can dodge cannonfire ) with Massively Hypersonic reactions (Reacted to lightning bolts)

Durability: Unknown (He was crushed by Shadow Bolt and lived. He is almost impossible to kill without dip due being part of Shadow Bolt.) Likely Large Building level+ (Halted his nephews from going into a rampage and causing extensive damage with a steamroller. Can use his powers offensively and defensively))