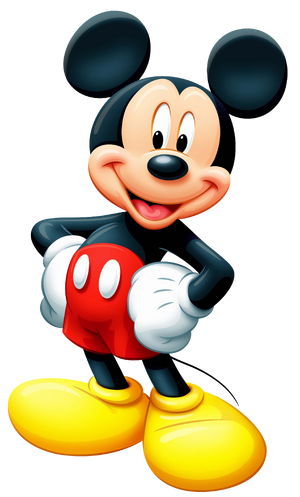 Mickey Mouse is the mascot of Disney, and is one of the most recognizable cartoon characters of all time. He has been in several cartoons and video games created by Disney, such as his time as King Mickey or Epic Mickey.

Powers and Abilities: Toon Force, Magic, Wizardry, Superhuman Physical Characteristics, Weapon Mastery (Shown here), Vehicular Mastery, Martial Arts (Shown here. Can also master boxing), Breaking the Fourth Wall (Can leave the cartoon and mess with the screen/frames of animation), Hammerspace (Can pull objects out of nowhere), Reality Warping (Both with and without the Sorcerer's Hat), Time Manipulation/Stop (Via Stopza), Spatial Manipulation (Shown here), Immortality(Type 2 ; Capable of detaching his ears), Abstract Existence (Type 2, Mickey´s heart is attached to himself in this fashion), Nonexistent Physiology Existence Erasure (Can cause Nobodies to fade from existence, which have Nonexistent Physiology), Non-Physical Interaction (Can harm Heartless, which are abstract entities, and Nobodies, which have Nonexistent Physiology), Regeneration Negation (Mid-Godly, can harm Heartless in a fashion that prevents them from coming back), Regeneration (High-Mid; Regenerated after being reduced to mince meat), Elasticity (Can extend/stretch his tail to use as a rope or lasso), Duplication/Body Control (Shown here), Teleportation (Shown here), Energy Manipulation, Gravity Manipulation (Can make enemies float via Fairy Sketch), Can delete and create beings and can bypass durability via paintbrush, Paint Manipulation, Acid Manipulation (Can melt opponents via Thinner), Morality Manipulation (Can turn enemies into allies via Paint), Ground pound (aka. air assault), Summoning (Can summon miniature versions of Donald, Pluto, Oswald, and Goofy to help him fight. Can summon magic brooms and the Great Armor when combining its five pieces), Broadway Force, Life Manipulation (Gave life to a broom), Light Manipulation (As King Mickey and via flare gun), Has the power of the Force (Regeneration (Mid-Low, in the form of force-healing), Telekinesis, Telepathy, Force Push, Force Speed, Force Sight, Mind Trick, Precognition, Force Light, Resistance to Mind Manipulation), Self-Sustenance (Type 1. Can breathe in space), Elemental Manipulation (Of fire, lightning, wind, water, ice, etc.), Wish Granting, Biological Manipulation and Power Nullification (Comes from volume 2 of Wizards of Mickey), Time Paradox Immunity (Was unaffected by time travel in a one-off comic), Astral Projection (Shown here), Limited Dream Manipulation, Telepathy (Has shown he is capable of communicating with other people via dreams), Water Manipulation and Ice Manipulation (Via Water/Blizzard techniques in Kingdom Hearts), Attack Reflection (Can momentarily summon a spherical shield of light around himself via Reflega, fending off enemy attacks), Magnetism Manipulation (Can create a vortex of magnetic force that draws in enemies via Magnega, dealing continuous damage), Explosion Manipulation (Shown here), Weather Manipulation (Used a crystal to change the weather and created a storm in the page 9), Status Effect Inducement (Can make opponents blind via Blackout), Paralysis Inducement (Capable of paralyzing someone), Fear Manipulation (via Terror), Statistics Amplification (Shown here), Sealing (Via some kind of gun), Creation (Shown here), Size Manipulation (Shrinked Donald), Petrification (Via petrification beam), Telekinesis (Stopped a bottle), Transmutation (Turned a crab into a balloon), Immersion (Can enter books/novels and interact with characters that exist in them), BFR (Sent Ugrun to the Land of Dreams), Sound Wave Nullification (Can nullify the dragon's roar via the King's Glove), Resistance to Acid/Morality Manipulation (Is unaffected by Thinner and Paint), Dream Manipulation (Resisted the Evil Queen/Witch from snow while trying to take over his mind from within his dreams), Existence Erasure (Can take hits from the Heartless, which can do this with every attack) and Memory Manipulation (Managed to fight off memory-stealing powers of "Forgive Me Rats" and over-powered them through sheer willpower in X-Mickey issue 4), The following abilities are only possible with access to the Electro-Box: Physics Manipulation (Can make a river flow uphill), Size Manipulation (Made one Bacterium as big as Mickey itself), Time Travel/Teleportation (Brought colonials, Indians and Mickey's great-great-great-grandfather into Mickey's bedroom), Life Manipulation (Brought Goofy's plant to life), Illusion Creation (Made Clarabelle look beautiful), Existence Erasure (Erased hay and an officer's clothes), Matter Manipulation (Brought back an erased wall and turned Mickey's house into the White House), Hair Manipulation (Gave Mickey a beard) and Telepathy (Could see Pluto's thoughts)

Speed: Massively FTL+ (Is very quick and nimble, on par with Sora and Riku)

Range: Extended melee range (A couple meters) in regular melee, Planetary with magic and the Force.

Intelligence: Very high (He is a true Keyblade master, a Jedi master and a proficient king)

Weaknesses: Is usually depicted as too kind and unwilling to hurt someone in some adaptations. The Supreme Sorcerer Crown will drain some of his magic everytime he uses it. The Sorcerer's Hat can easily be knocked off and hasn't fully mastered it which can backfire on Mickey, otherwise none notable