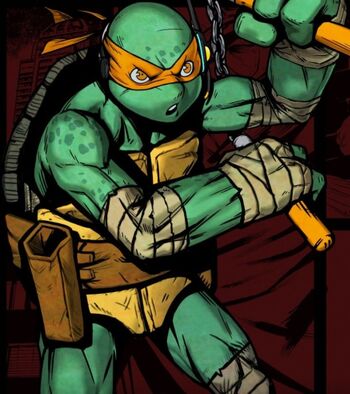 Michelangelo is always good for a laugh, but don't underestimate his skills. He's not afraid to grab a pair of pompoms and choreograph a miniature pep rally when his teammates' special abilities need refreshing. And his disco dancing mesmerizes foes into cutting a rug of their own, forcing enemies to drop their defenses and giving the Turtles a chance to attack.

Powers and Abilities: Superhuman Physical Characteristics, Regeneration (With Pizza), Energy Projection (With many of his equipment), Gravity Manipulation (With Gravity Device), Ice Manipulation (With Freeze Bomb), Disease Manipulation (With Virus Bomb), Expert in Ninjutsu (Includes Caused his enemies to dances and drop their guards, Teleportation, Healing, Creating a decoy to distract enemies, Forcefield Creation, Berserk Mode, Speed Augmentation (Can accelerate his overall speed for a while), Invulnerability (Immune to all attacks for a while), Size Manipulation (Can use Giant Hologram to create a giant form of himself), Can create shockwaves) | Superhuman Physical Characteristics, Energy Projection, Missile Projection, Flight, Regeneration (His robot can regenerate itself)

Retrieved from "https://vsbattles.fandom.com/wiki/Michelangelo_(Mutants_In_Manhattan)?oldid=5961672"
Community content is available under CC-BY-SA unless otherwise noted.