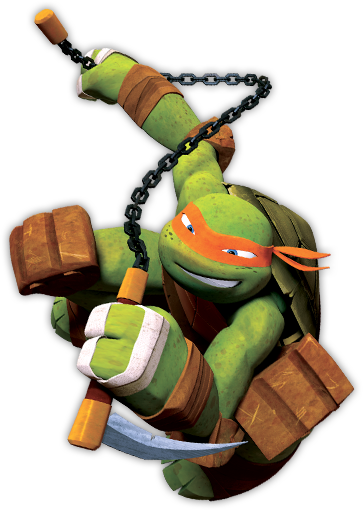 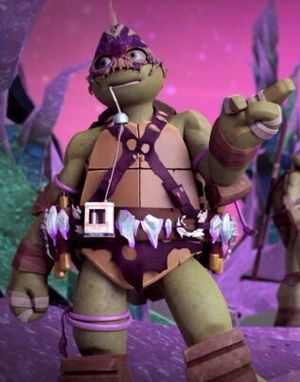 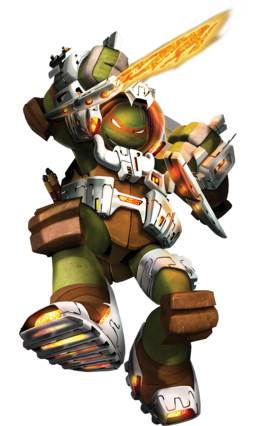 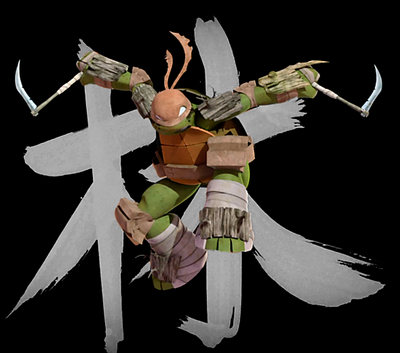 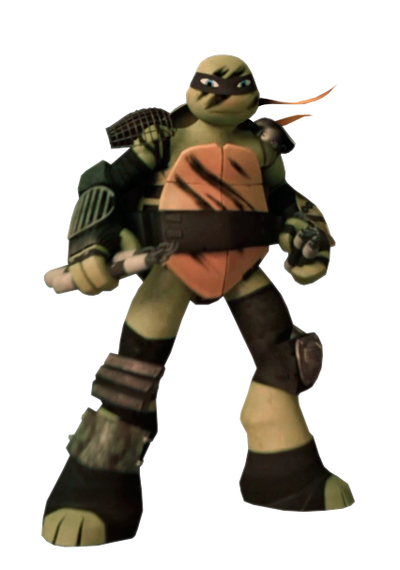 Michelangelo or Mikey is the "wild one" of the Teenage Mutant Ninja Turtles. Though he possesses a "child-like" innocence, he always brings his best game to a fight. He fights with two nunchaku, which convert into kusarigama.

Michelangelo is voiced by Greg Cipes.

Powers and Abilities: Superhuman Physical Characteristics, Martial Arts (Mastery of Ninjutsu), Weapon Mastery (Most notably with his nunchucks that turn into a kusarigama), Instinctive Reaction, Stealth Mastery, Regeneration (Low. He recovered his teeth in a few hours after the fight with Baxter Stockman), Smoke Screen Generation (Via Smoke Bombs, which can disorient enemies by causing irritation to the eyes and clouding their vision), Resistance to Electricity

Speed: Supersonic+ (Able to dodge and outrun lasers with ease, able to keep up with Tiger Claw) | At least Supersonic+

Stamina: Superhuman (Can fight for hours without tiring)

Range: Standard melee range, Extended melee range with his kusarigama and several other weapons, Tens of Meters with shuriken and smoke screens, Hundreds of meters with Yumi, crossbow, and Laser Blaster

Intelligence: Regarding conventional intelligence, Michelangelo is ditzy, scatterbrained, and disorganized. In combat however, Michelangelo is incredibly skilled, debatably of caliber similar to Leonardo himself. He specializes in agility and sheer unpredictability. Trained by Splinter in the art of the nunchaku for years, Michelangelo possesses a keen affinity for them. Aside from using them to wrap around an opponent's joints and weapons to disarm them, Mikey swings and strikes with them in the manner akin to flails in conjunction with his capoeira fighting style. This is supplemented even further with his kusarigamas, which he often swings overhead and strikes with the bladed end, or uses to entangle his enemies with chain and toss them around

Start a Discussion Discussions about Michelangelo (2012)