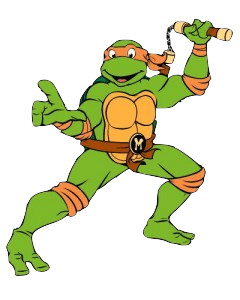 Attack Potency: Wall level (Can tear apart the robots of Krang which are made of a metal harder and more durable than titanium) | Small Town level+ (Implied to have foughten and killed a Kraathatrogon, a being that can shake all of New York City simply by moving, as well as a being that overpowered Tiger Claw and Casey Jones) | At least Town level (Should be roughly comparable to the alternate timeline Raphael, who could shatter mountains)

Intelligence: Below average (sometimes shows signs of being oblivious)

Start a Discussion Discussions about Michelangelo (1987)