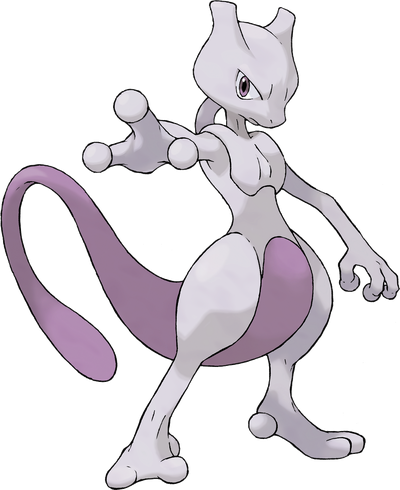 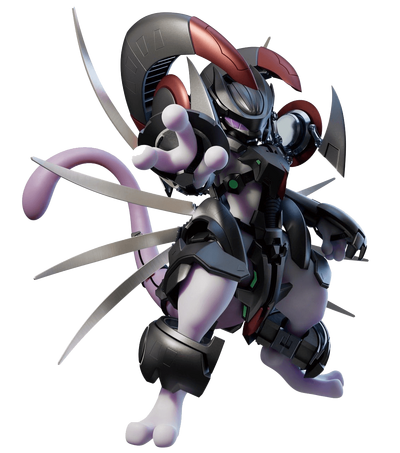 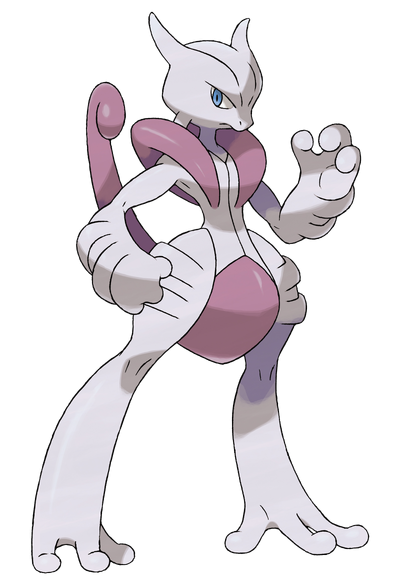 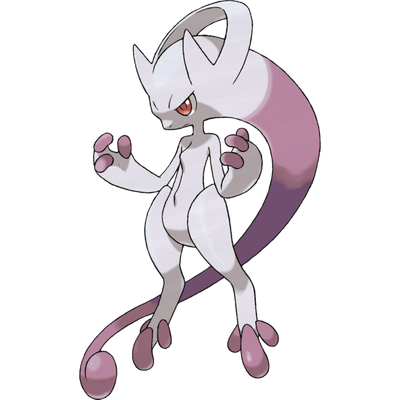 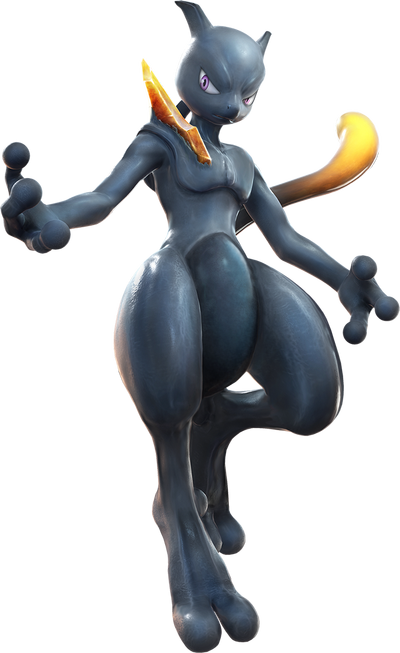 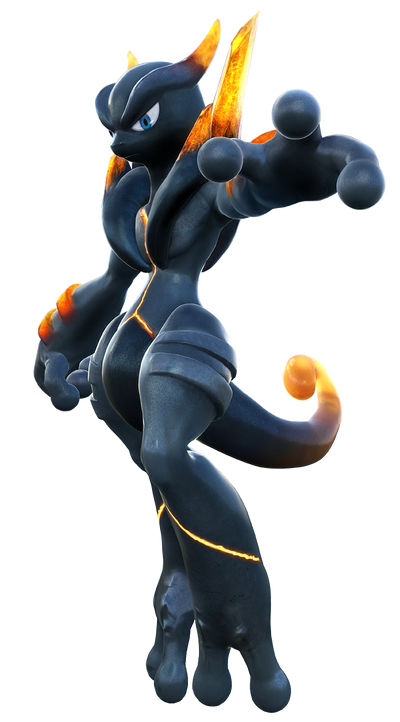 Mewtwo is a Psychic-type Legendary Pokémon. The story of Mewtwo has quite a few versions, but they all start off the same. Before Mewtwo, there was Mew, the ancestor of all Pokémon. On a day in July, the criminal organization found Mew, and managed to acquire one of its eyelashes. Team Rocket hired scientists, among them the Gym Leader Blaine and the Lavender Town elder Mr. Fuji, to use said eyelash to clone Mew and create the most powerful Pokémon alive. They succeeded, but due to events that happened during his creation, whether it being the death of AmberTwo, the death of Mr. Fuji, or horrifying genetic experiments and the failure to give it a compassionate heart, Mewtwo became vengeful and savage. Mewtwo was unable to be controlled, and therefore went on a rampage, destroying the lab it was created in and killing a majority of the scientists in it. Its escape led it to Cerulean Cave.

Gender: Genderless, although usually referred to as male

Superhuman Physical Characteristics, Telekinesis, Dynamax, Immortality (Type 1; Is a clone of Mew, who has an immortal life force), Self-Sustenance (Types 1 and 2), Telepathy, Genius Intelligence, Memory Manipulation, Weather Manipulation, Illusion Creation, Mind Manipulation (In the first movie, Mewtwo took control of Nurse Joy's mind and wiped the memories of everyone involved, even after he already left. Would've mind wiped everyone involved in his special episode if not convinced otherwise. A small bit of his influence gave Butterfrees' Sleep Powder the ability to mind wipe all of Team Rocket. Connected with every mind on the planet as Mega Mewtwo Y in SMD. Has been shown to work on robots as well), Flight, Spaceflight, Forcefield Creation, Invisibility, Teleportation (Can teleport himself and others), Explosion Manipulation, Power Absorption, Drain, Swap, and Transfer, Power Nullification, Energy Manipulation, Energy Projection, Stealth Mastery (Defeated experienced Mystery Dungeon explorers while remaining unseen), Future Sight bypasses Shields and Precognition, Status Effect Inducement (Confusion, Sleep, Paralysis, Burn, Freeze and Wait), Time Travel, Afterimage Creation, Reality Warping, Summoning, Electricity Manipulation, Fire Manipulation, Soul Manipulation (Can send souls to other dimensions), Portal Creation, BFR (Teleported Rand and Edward into a void, and sent only Rand back), Aura, Damage Reflection (Can erect a barrier that has a 50% chance of reversing the next thing done to Mewtwo, even if it kills him, and deals set damage back), Regeneration (Low-Mid; Could regenerate from Deoxys-induced chest wounds that looked fatal), Passive Self-Resurrection (Brought himself back to life through self-regeneration after being terminated by the scientists), Healing, Metal Manipulation, Air Manipulation, Ice Manipulation, Proficiency in fighting with spoons and psychic blades, Elemental Manipulation, Fear Manipulation (His Unnerve Ability scares the opponent to the point of crying for help and rendering them unable to eat. Has access to the Intimidator IQ skill, making his attackers get the Cringe status and not executing their move. His cold glowing eyes are stated in the Pokédex to induce fear), Empathic Manipulation (Via scaling to Mew, who was stated to have the capacity to make people fall in love), Precognition (Via Future Sight; As the ultimate Psychic Pokémon in Gen 1, has superior psychic abilities to Alakazam), Enhanced Senses (Via various IQ skills, including trap seer which allows Mewtwo to see the invisible), Cloning (Of others, as he cloned Ash's Pokémon seemingly without the use of machinery in Puzzle League), Power Mimicry, Danmaku (Filled the screen up with beam attacks in Guardian Signs), Sleep Manipulation, Statistics Amplification (Missing temporarily boosts Physical and Special Attack, Moves that have a natural advantage have a higher chance to crit, Limited Causality Manipulation (A secondary effect of Miracle eye in Pokkén “resets” the last move Mewtwo did without Mewtwo doing anything), Statistics Reduction, Petrification (His beams and even physical attacks have petrified Ash and the Pokédex Holders [minus Gold] respectively, and it was unintentional at that), Light Manipulation, Darkness Manipulation, Resistance Negation (Miracle Eye negates immunity to Psychic moves. Some versions of Mewtwo's Swift bypasses resistances, skills, and/or abilities, passive or otherwise. His special Poké Balls bypass the fact that Trainer Pokémon can only be caught by one Poké Ball), Transmutation (Reduced Poké Balls to light to free his fellow clones), Attack Reflection, Earth Manipulation (Most likely responsible for the collapse of Cerulean Cave), Matter Manipulation (Created the Mystery Rock in the Illusio Kingdom in Pokémon Conquest out of thin air), Homing Attacks, Can create six black circles for the purpose of rotating around him for defense, Non-Physical Interaction (Can attack Non-Corporeal entities), Pseudo-Intangibility (Via the Pierce Hurler skill, which has thrown items go through walls and enemies, but still do damage to every pierced enemy), Spatial Manipulation, Can seal others in psychic bubbles, Pocket Reality Manipulation, Resistance to Extreme Cold, Cosmic Radiations, Mind Manipulation, Sleep Manipulation, Telekinesis, Petrification and Telepathy

All of Mewtwo Abilities, Time Stop (Appeared to have stopped time to keep his realm from collapsing)

Attack Potency: Planet level (Capable of impaling Deoxys with a spoon) | At least Planet level, likely Solar System level (Vastly superior to its base form. Fought Zygarde as Mega Mewtwo X and Y in the manga, after Zygarde absorbed some energy from the battle between Yveltal and Xerneas) | Multi Solar System level (Created his realm that contains multiple stars), higher as Shadow Mega Mewtwo X

Stamina: Extremely high (It was able to fight against Mew and other formidable Pokémon for a while, capable of using large-scale, devastating techniques without noticeable exhaustion. Had to have traversed Western Cave, which has 99 floors and is chock-full of powerful Pokémon. Was capable of using its psychic powers after Giovanni drained him of most of his energy. Has infinite PP in Stadium.)

Standard Equipment: Mewtwonite X and Mewtwonite Y (Allows Mewtwo to Mega Evolve), Berserk Gene (Doubles AP at the cost of confusion), Bright Powder (Decreases opponent's accuracy for the duration of the fight), Custap Berry (Gives highest priority if eaten), King's Rock (Can potentially cause the opponent to flinch after any attack), Destruction Robe (Increases the effects of Pressure)

Intelligence: Extraordinary Genius (Recreated and improved the cloning technology invented by Team Rocket to clone various Pokémon. Is the mastermind behind the events of Pokémon Puzzle League. Recreated the DNA machine in the Pocket Monsters manga. Genius in combat as well, as he was bred to be the best Pokémon ever, and effortlessly dominated Gary, who had 10 badges and even defeated some of Giovanni's other Pokémon. Could also fight many Genesect, other Legendary Pokémon created by man, though Genesect is augmented unlike Mewtwo, and has the type advantage.) 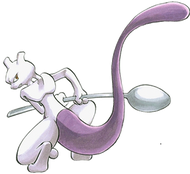 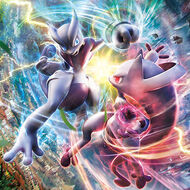 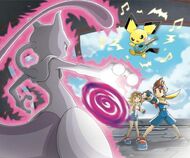 Fiamma Of The Right (To Aru Majutsu No Index) Fiamma's Profile (Speed was equalized, 5-B versions)